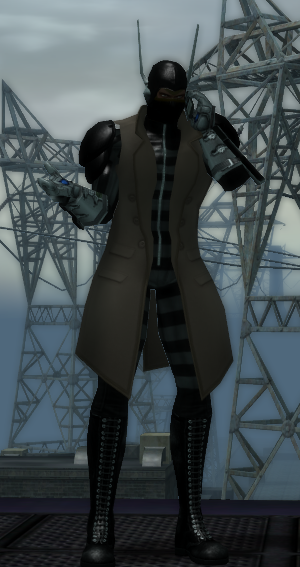 Towards the end of his high school career, Hugo Simms’ family was at the center of a media frenzy involving the mysterious disappearance Hugo’s younger sister, who was never found. Everyone was a suspect, but nobody got heat worse than Hugo, whose bizarre statement about the events leading up to her disappearance locked him in as the target of the general public’s ire. According to young Hugo, he and his sister were abducted by aliens and experimented on, and for some reason they decided to release him, but keep his sister. At first, people assumed he was in shock or in denial; as time went on, however, he adamantly stuck to his story, and people began to question his mental state. The more he spoke out about the alien abduction, the less people believed him, and the more suspicious he looked. Regardless, a lack of evidence ensured that he was never charged with any wrongdoing. As far as anyone was able to prove, he did not have anything to do with his sister’s disappearance, despite his unbelievable alien alibi.

The entire ordeal shattered his family. For a while, they tried to keep up appearances. They even pretended to support Hugo’s new obsession with extraterrestrial life, a hobby that his parents inevitably would come to perceive as a mockery of their failures. Eventually his parents divorced, and when Hugo turned eighteen, they abandoned him out of a need to start over. Rather than do the same, Hugo latched onto his obsession with aliens, moving into an RV and taking up residence in Nevada near Area 51 to study extraterrestrial phenomenon firsthand. He spent over a decade building custom equipment to hijack signal transmissions coming from and going into outer space, as well as discreetly siphoning classified information from the military. His ability to acquire highly-secured data built him a reputation on the dark web among conspiracy enthusiasts as the notorious Airwave, the mysterious master of information.

One unusual evening, a series of inexplicable solar flares started causing communications technology all over the planet to malfunction. While most people believed it to be a naturally occurring event, Hugo was confident that level of electromagnetic interference could only be caused by one thing: aliens. With a bit of effort and ingenuity, he was able to discern some kind of encrypted message in the pattern of the solar flares, and then decrypt that message to reveal a set of coordinates across the country in Paragon City. Without thinking twice about it, he packed up his RV and hauled his entire life over towards those coordinates, desperate to experience the magnificence of an alien life form up close. When he arrived, he got exactly what he wanted.

The arrival of the Schism happened right before Hugo’s eyes. He gazed upon them with awe from a safe vantage point as the bio-cybernetic hive mind species absorbed organic life and technology and assimilate it into itself, growing stronger. Hugo spent his entire adult life imagining seeing aliens up close, yet it was unlike anything he could have ever anticipated. Unfortunately, before he was able to initiate direct contact with the creatures, they were annihilated by Signal and the rest of the Vanquishers. They destroyed what would have been the culmination of his life’s work while he watched in dismay, and then they left to go hunt down more of the Schism elsewhere.

Though distraught, and infuriated by the Vanquishers’ interference, Hugo wasn’t ready to give up on meeting the Schism for himself. He took to his RV control station, which had been analyzing information transmitted by the Schism when they arrived, and unearthed a possible secondary invasion location nearby. He arrived to find no trace of the Schism, but instead a partially-assimilated human man now known as Fuse. Eager to learn more about the Schism, Hugo welcomed Fuse into his RV home and has been working with him to bring the Schism back to Earth ever since.