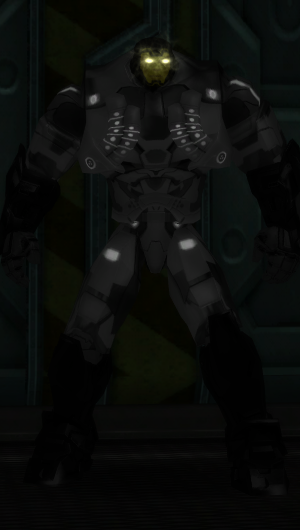 The less said of the man called Atlas Eden, the better. He was a link in an evolutionary chain -- a flesh and blood human strangled by physiological needs and psychological shortcomings. He had delusions that his existence was one worth enduring. The insignificant and ignorant often do. His time prior to ascension was nothing more than a mirthless meandering, monotony broken up only by grandiose gestures to get back into the good graces of his on-again, off-again mate. He was, in Earth terms, a loser.

Then came salvation from the stars themselves. In the midst of the wildest solar storm modern humanity ever experienced, the Schism made their presence known. They were extraterrestrials from far beyond Earth's solar system -- a hive mind that enveloped and assimilated entire stellar civilizations. A few small pods made contact with the planetary surface near strategic military targets. Atlas Eden just happened to be driving nearby one of them: Edwards Air Force Base in California.

This first strike was intended primarily as a scouting mission by the Schism. The pod that landed near Edwards' outskirts was tasked with the absorption of nearby technology and lifeforms so that Earth could be more accurately studied and prepared for. When the proper invasion commenced, the Schism could leave no variables to chance. As the amorphous scouts expanded outwards from their impact point, Atlas Eden was in the midst of a cross-country relocation. Suddenly, the undulating, unfamiliar Schism appeared in front of his vehicle. He swerved to avoid them, running off the side of the road in the process. His car flipped and was rendered inoperable. As he tried to crawl free from the driver's side door, the alien haze overcame him. He was chosen.

In the wake of this harrowing encounter, new life was created. The Schism turned that hapless human into Fuse, a convergence of man and machine, and uplifted him into their connected network of thought. It was a privilege to be expanded beyond his former limitations. Food, water, sleep -- all these nagging desires no longer hounded him. The Schism were the cure to all of humanity's ails.

Yet, as Fuse searched the area for the scouts that changed him, he found nothing. In fact, the Schism's presence seemed to vanish entirely. Soon, it became clear what happened. The benevolent gift of progress, passed down from the heavens, was met with resistance. The Vanquishers, warned by the Schism's longtime foe Signal, formed a bulwark against the Schism. Their ambassadors to Earth were wiped out, and Fuse was left stranded with no guidance of what to do next.

That's when a paranoid tracker by the name of Airwave found him. The mysterious individual claimed to know much more about the aliens' activity, as well as the Vanquishers and Signal. Airwave wanted the Schism to return -- just like Fuse did. Together, perhaps, they could make their wish come true