Ana Claire Xiao was born in Baumton, Rhode Island in 1987 to Derek and Karen Xiao. A financially comfortable family, the Xiao's lived in a lush apartment in what is now known as Grenadier Village. From the get-go, her mother sensed a sense of rebellion in the child. Her parents were often called into school, usually under allegations that Ana was bullying the other children. They'd scold her in front of the teachers of course, but secretly praised her for what they knew was an early sign of heroism, protecting the playground weaklings from the true criminals.

In order to put to use all of her pent up energy, her father began training her in various skills. Martial arts, archery, and public speaking courses soon became part of the daily routine. In her spare time, Ana and her mother would often visit Atlas, taking tours of City Hall or just bonding in the park. On one such an occasion, Karen brought her to Prometheus Park, where they picnicked beneath the statue of the fallen hero. As they'd sat there, sharing musings of various nonsensical things, Karen turned to her daughter and smiled. Her eyes, however, were solemn and somewhat prophetic. She said, "You know... I don't have a doubt in my mind that you could have a statue of your own someday, kid." To this day, Ana holds this memory in particular close to her heart. It was the last day she would ever see her mother alive. 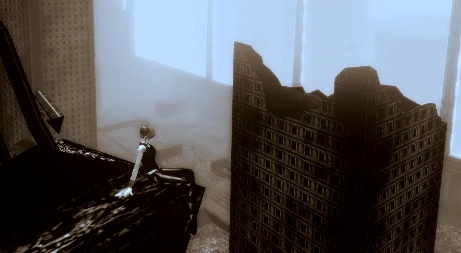 Ana overlooking the ruins of Baumton.
The morning the Rikti invaded was a day that would go down in Paragon City history. It was a travesty unlike anything the city had ever seen before. It had started out peaceful enough. Derek was at the law firm, Karen was with her book group, and Ana was in math class. The looming yellow skyline was unfortunately not enough to warn the citizens of Baumton of an oncoming attack.

Then came the ships. One or two at first...then a dozen...then a fleet. Bombs rained from the sky as the aliens teleported to the streets below. Civilians ran for their lives as on duty policeman rang in commands to send out alerts to all the major zones. In a matter of minutes, buildings were collapsed, homes were demolished. Citizens were either vaporized or abducted. Innocent people and criminals alike huddled in fear as the Rikti left nothing in their wake.

As the heroes flew in, the children of the local elementary school watched in horror as the bloodshed began. Ana sat huddled in a corner, making a valiant effort not to cry as she pulled her classmates toward her. Her heart was pounding in a twisted excitement as she watched many of Paragon's elite send wave after wave of the Rikti soldiers to their death.

There were screams as the distinct sounds of rubble pounding against the walls filled the classroom. There were foreign, butchered voices in the halls. A piercing shriek could be heard as Mr. Bellmont joined the ever increasing casualties. And then... silence. The sounds of heels clopping loudly on the linoleum floors. As the door handle turned, the students sobbed quietly while others seeked shelter. The expressions of terror quickly jumped to relief as the figure made itself known. Sister Psyche. She turned to Ana, the self-proclaimed leader of the pack. "Everyone all right in here?" Ana nodded in disbelief. The hero smiled and saluted to the young girl. "Keep 'em safe, we'll have this cleaned up in a jiff."

The death toll was, needless to say, catastrophic.

After weeks of battle, the Rikti had thinned out and retreated. It was a shallow victory, as several notable heroes were counted among the dead. Ana waited in a relief tent just outside the city as a rescue team worked day and night in their search for survivors in the rubble. After weeks of searching, only a small percentage of Boomtown's population had been recovered alive. Unfortunately, Derek and Karen were not among them. A funeral service was held for Mr. Xiao days later. Karen's body was never recovered, and a memorial plaque was placed next to her husband's grave.

Ana left Paragon City to live with her grandmother in Darien, Connecticut. It would be another seven years before she returned.

At the age of 17 Ana made the "decision" to move back, this time to Steel Canyon. She didn't have much of a choice. Ana had grown a bit rebellious since the death of her parents, and her grandmother had grown tired of her attitude and late night antics. It was either this or boarding school.

On top of attending the local high school, she had also been assigned to be a part of a mentoring program with the renowned Professor Ranzz, a man consider by his peers to be a genius in the field of electricity. It was agreed that every Tuesday after school, Ana would help him keep the laboratory orderly, stay for a brief lecture, and then leave.

On one such a day, Ana found herself presumably alone in the lab. She got to work wiping down the tables, when she noticed the door to the basement slightly ajar. The average teenager would probably ignore such an ominous sign, but Ana decided to investigate. Inside, along with an overpowering stench, was what appeared to be an old-fashion modified Tesla coil. Excess electricity flowed freely from the cylinder, while four well-charred leather straps hung freely from the base. Deciding at this point it was best to retreat, Ana darted up the stairs. Straight into the arms of Professor Ranzz.

She awoke several hours later in tremendous pain. Every muscle in her body seemed to contract and sizzle, and she could taste copper on her lips. She stumbled to get up, and as the room spun back into focus, her eyes grew wide in horror as she made out the figure of the scientist, collapsed in the corner and badly burned. She tore from the room and up the stairs, static discharge flying from her fingertips as light bulbs cracked and exploded from behind her. Though she could not remember the events that transpired, she was absolutely certain that her life had been altered.

The Saints of Paragon

The next couple of years were difficult. Along with dealing with and honing her newly developed powers (as well as her new found side hobby, costumed crime fighting) came the psychological issues. It was difficult for her to deal with what had happened to her, knowing she had killed someone. She still hadn't grasped what happened during the blackout, which only added to the anguish. As a result, she began abusing alcohol whenever she could get her hands on it. She would often show up late for class, completely hungover and without her assignments. She was at every college party, and would spend her nights off in the Pocket D.

It was on one of these nights that she met a hero by the moniker of Roughneck Inferno. Like her, Roughneck was a troubled teenager who had made his share of mistakes in the past. He claimed to be part of a group who reformed young adults into upstanding members of society. Naturally, Ana was hesitant at first. She knew damn well she had a problem, but why was it any of his concern? Nevertheless, she agreed to join the group on a "trial basis".

Two years later, she now operates as a commander of the Saints of Paragon, as well as a mentor to their subgroup, Young Saints.