Captain Crusader is an easy going youngster. Currently in his early 20s, he is a fan to those Heroes who have come before him and is always ready to learn. He loves a good sense of humor, yet lacks the ability to be funny himself. His real name is Chris Colon (pronounced Cologne or KAH-LONE) and he originates from Puerto Rico.

The good ole Cap never had a real family and lived on the streets most of his life. He was raised within a Church during that time which taught him the difference between right from wrong. However, Captain Crusader didn't like the passiveness. He decided to take Good Vs. Evil to the next level and prayed for super powers and lo and behold, he got them. As a child Captain Crusader always seemed a bit faster than the rest when racing down the aisles when Church was dismissed.

After going to work for a year, he saved up enough money to buy his first costume: Old Blue and Dandy. Upon joining the Galacto-Rangers however, The Cap changed his uniform to gain better prestige for his newfound home. Currently, Cap uses his "cape" uniform. ((Picture Coming Soon))

Captain Crusader developed his name after hearing what "Crusade" meant: exert oneself continuously, vigorously, or obtrusively to gain an end or engage in a crusade for a certain cause. He decided he would be a Crusader to fight off Evil.

From his darker years, Cap managed to save up a small fortune. He vowed to never use that money, but recently needed to buy some new threads. After debating with himself, he made himself believe it was ok.

Currently, Captain Crusader is trying to learn from the best Heroes in Paragon. He's started taking classes at the Moose Lodge from The Human Flashbulb. Cap spends his time fighting Freakshows but also taking a break to mingle in Atlas Park and get to know other Heroes. Captain Crusader has been hanging out with Jen Shepard a lot lately and accompanied her to her first photo shoot.

Cap seems to get into fights with a lot of men who he "believes" to be perverted. It's Cap's pet peeve.

CC desires to be a great team leader, and even more so, a Supergroup leader. He's always trying to "practice" his leadership skills in missions, especially the rare Task Force missions he's been assigned. He has successly lead one Task Force mission assigned by Sister Psyche herself!

Captain Crusader has but 1 living family member that he knows of. That is his brother, Nightmare Crusader. Their relationship was very much of a Ying and Yang sort. Not much is known about Nightmare Crusader except that he is everything the good ole Cap is not.

Captain also had some dark years that no one knows about. He used his speed to make ends meet while being a homeless teen on the streets. He often felt much guilt and became ashamed of himself. Until, like lightning, he decided to put his skills to work. He became a mailman for a solid year and won the "Fastest Mail Delivery" award after only 7 months of working.

Cap cringes at the words: mom, dad, and parents.

The Captain also has a secret crush....but I'm not telling!

"What you say is reasonable, logical, justifiable. But does that make it right?" - Nightcrawler

"Then try to be the complete opposite of yourself" - Foxy "So be a gay villain?" - CC

"Proper Porting Prevents Poor Pacing" - I forgot who said this.

Due to the strength he as gained from being at super speeds all the time, Captain Crusader decided to base his fighting off his strongest feature, his legs. With powerful kicks and super speed, Captain Crusader puts a new meaning in the term "kicks ass". A more...literal meaning. 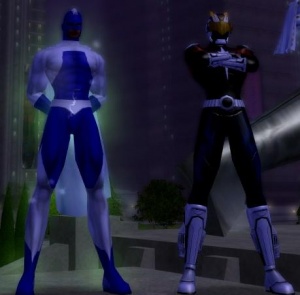 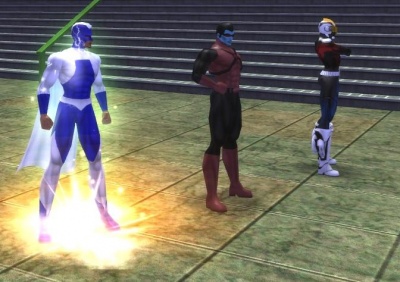 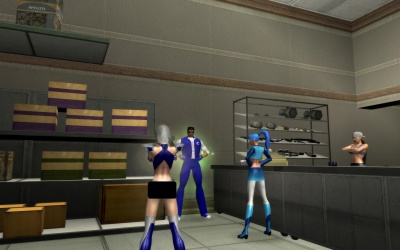 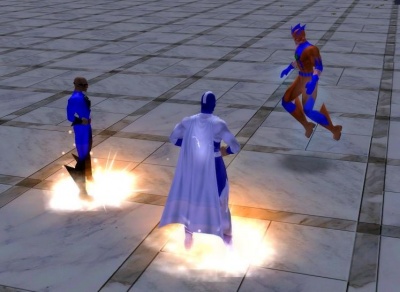 Cap's idols. -drools- Timebender for his speed and Galactoman for his coolness.

After meeting and speaking with a Hero named Chogori, Captain Crusader became recruited by him into the Galacto-Rangers. 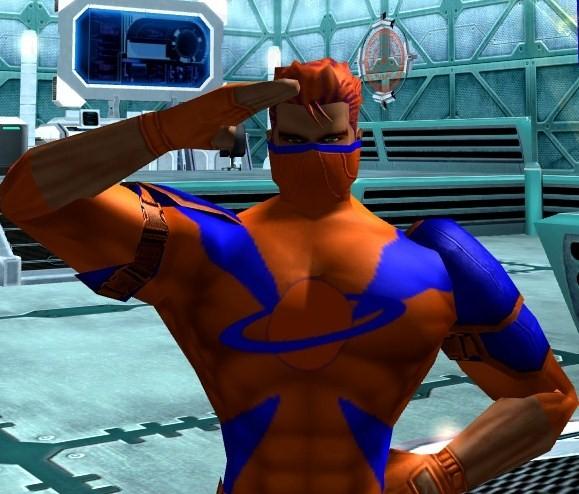