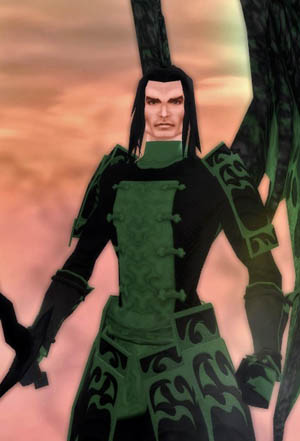 "A fallen nation of angels.
An army of shadows to blame.
A struggle for survival and raw materials to claim,
An ancient poem,
Claims life,
We justify our actions
A book makes decisions,
For how to live our lives.
This is my war
This is my battlefield,
Where fire crosses water,
Like stone through glass.
- "Battlefield" Panzer AG

Intimidating best describes this man of a darker nature clad in ancient armor with an archaic and looming presence. With eyes and hair the same pitch black as the detailing on his armor, he is often seen as cold, emotionless and aloof. There is a seriousness to his presence that is rare among people nowadays, he is tall, even by modern standards, and built lean and strong.

Most impressive however, beyond his armor and striking mostly silent demeanor are the massive draconic wings he seems able to manifest at will. This wings enable him to fly, and it has been rumored that he is able to take on more draconic physical manifestation, but has never been documented. He has however been seen with clawed fingers, his nails longer, slightly hooked and shark like a predator.

Quiet and reserved, a watcher, acting when necessary and without waste, nothing seems to be done without some sort of purpose or meaning. Interjections are often sharp, curt, or to the point, and its rare to hear him speak, only when important or a question is posed to him directly. Damon believes strongly in the importance of what one both does and says, and appears to always value time and existence.

Others have taken this as rudeness, or an elitist sense of self importance, they discount his demeanor as frosty and go about their own way. Some however have welcomed his strong, level demeanor, finding it easy to follow him into even the worst situations. Its not to say however that he can't be prodded into a discussion, however if Damon does take the time to speak with you at length it would be wise to heed his words.

Damon's age, country of origin, and true name are all unknown, and it is also unknown whether his powers and abilities come solely from his patron deity or if they are partially his own. As a result he often surprises others with what he is able to do in certain situations. 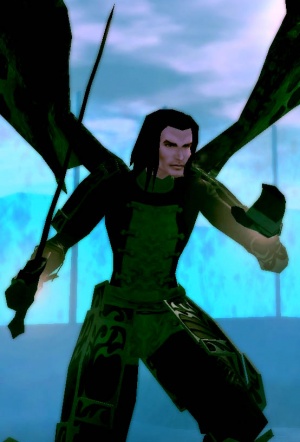 His mastery of swordsmanship is by far well above that of most people who live in this day and age. Wielding an ancient weapon not often brought into battle nowadays Damon is a fearsome foe, able to subdue large groups of opponents in a single sweep of his sword.

At times he is often able to focus his power, and the will of Drakescel into his blade, enabling his strokes to swing true and inflict more damage to his opponents (Critical Hits & Build Up). While his blade is sharp, and quite deadly, he takes the utmost care to ensure all of his opponents survive the ordeal, wishing to remain on the good side of the authorities.

Formed of the deepest pitch and the strongest ore, the armor is of a divine nature and holds within it the power to control the darker elements. When Damon wears the armor he is able to control and manipulate the dark element, it grants him the ability to deflect weapons even ranged ones with dark matter, and it protects his mind and body from manipulation and control. But the most impressive powers granted to him by his armor is his ability to cloak his entire presence in dark matter making him almost completely imperceivable to the naked eye.

It is believe that the darker elements also grant him the power to manipulate the life energy of creatures around him, siphon it off to aid him, or to even bring him back from the edge of defeat making him nearly impossible to defeat in battle. Though this is a rumored ability of the darker element it has not yet been witnessed.

Damon is in peak shape for even a super powered human being, and is well beyond that of a normal human being. It is unknown whether he is truly only human, but he is able to eat and drink human food at will and does appear to need it for nourishment.

He is easily able to jump and run faster then most people and his strength is unparalleled.

Damon is able to move about in the air through the aid of the powerful dragon wings, a aspect of his patron deity Drakescel. These wings are so powerful that when moving fast enough he is able to create small wakes of air that can knock people over with their power. The wings also allow him to hover in the air, and grant him some mobility and protection in battle with their tough hide. 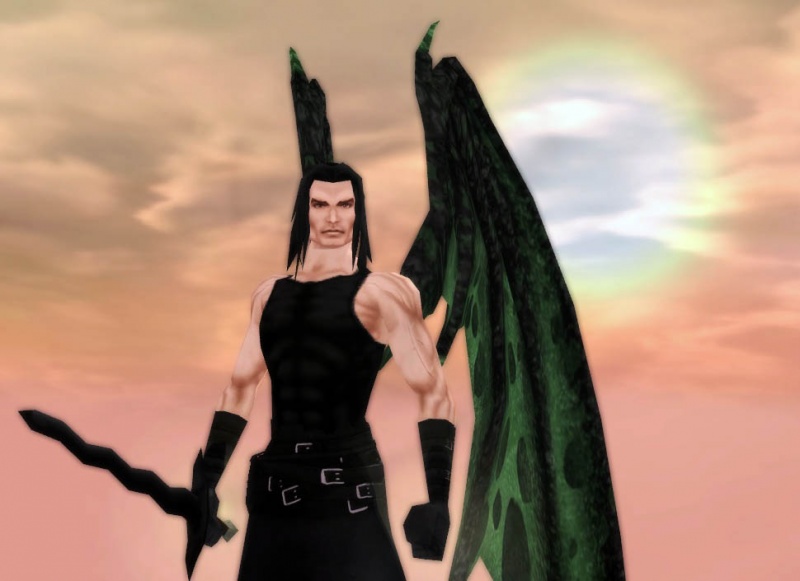