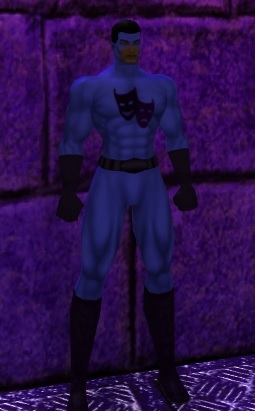 With such a potentially hazardous and dangerous mutation, it's fortunate that Jaime's brain is wired that of a decent person. He only wants to do good, actual good, in the world that he knows is half wonderful and half absolutely terrible. He is generous, kind-hearted, but still assertive. He is loud and outspoken about progressive politics and remains a fighter for the little guys: minorities, immigrants and all the repressed alike. While Jaime doesn't believe that EVERY criminal is necessarily a bad person, nor every villain incapable of change, he's not blind to the fact that there are just some individuals that are stuck as they are. The young hero is also quite aware that not all 'heroes' are great people, and he has no problem calling them out on their hypocrisy. He does everything in his power not to use lethal or psychologically damaging affliction with his powers, but will do so if absolutely necessary to the best of his judgement. With that being said, Jaime does suffer from a clinical depressive disorder brought on by the mishaps of his powers in the past - a part of him that can creep up into prominence from time to time.

Sensory Manipulation/Illusion Casting - El Lusion's primary mutation revolves around his ability to psionically influence or alter the perceptions of others and cast a variety of illusions. He most commonly accomplishes this by manipulating the senses of hearing, sight and even touch, easily creating shared localized illusions and misdirection. With more prominent concentration on specific beings, he is even capable of casting more prominent and realistic illusions that further involve the senses of smell, taste, secondary senses and even leading into psychosomatic phenomena.

Telepathy - Using mutant powers, El Lusion can accomplish telepathic feats by projecting his voice or images into the perceptions of specific people. Though weak, he does possess limited mind reading abilities, though they rely on the perceptions of those he is affecting already in place.

Self-Defense - As an unofficial apprentice, El Lusion has had some basic street fighting and self-defense coaching from his superiors-on-the-field.

Stealth - The nature of El Lusion's abilities has naturally landed him in many jobs requiring stealth, espionage or infiltration. With his powers he is easily capable of completely masking his presence from the basic senses, and even take the illusionary-form of different people.

Overclocking - It's been demonstrated that with both factors of prolonged time usage, and the use of more vivid illusions, results in gradual physical and mental strain. This is evident through migraines, nose bleeds and in the most extreme case thus far temporary unconsciousness.

Nightmares - A negative aspect of his mutation is how he is capable of manifesting his dreams as illusions around his own unconscious state. Though very rare due to his medication, it is possible that his nightmares could result in the psychosomatic damage of his surroundings.

Baking - Because his parents owned a baking business, Jaime didn't really have a choice but to grow up learning the family trade. It is however something that he actually enjoys doing, and he's pretty good at making delicious things. There are a couple family recipes under his belt!

Bilingualism - Jaime is fluent in Mexican Spanish, and English as a second language.

Political Activism - Jaime has recently earned his B.A. in Political Science. He is very involved locally (especially his heroic identity), and makes sure that his loud voice knows exactly what it's talking about. He has a promising future in politics, and plans to further his educational endeavors despite the difficult balancing act.