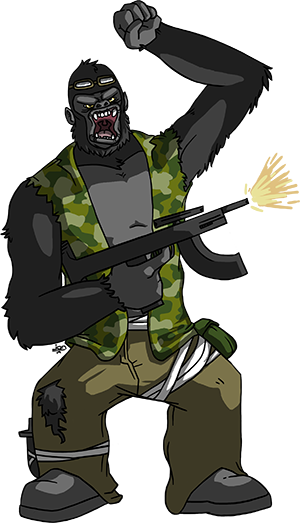 In the late 90’s, the United States military started a top-secret program that tested the effects of super-soldier serum on various species of animals in an attempt to create domesticated, obedient operatives with incredible abilities. Most of the test subjects died, but there was a lone subject who survived: a young silverback gorilla that was raised in captivity specifically to be a soldier for the serum trials.

Through continued experimentation with various forms of super-soldier serum, the gorilla acquired a heightened intellect that allowed him to learn about military tactics and combat training. With his intellect came unusual psychic abilities that also gave him the power to communicate with the minds of humans. Eventually, the gorilla learned to manipulate this mental connection and overpower people psychically, turning humans into strategic puppets he can use just by exerting his will on them. Using these powers, the gorilla fled the facility that created him and disappeared for years.

After the gorilla’s escape, the U.S. government erased all evidence of the animal testing program’s existence. The newly freed gorilla took the moniker Guerilla and spent several years building himself a militia of ruthless mercenaries throughout the seedier corners of the world. Recently, his army has been acquiring political power across the globe through coordinated assaults on various government facilities, which has sparked a U.N. investigation into who the mysterious leader of the Guerilla Army actually is.

Guerilla's second-in-command is a merciless merciless mercenary who goes by Foxtrot. Because Guerilla is physically incapable of full human speech, he uses Foxtrot as a sort of human ambassador for him to speak through. On his own, Foxtrot has a long history within the world's criminal underworld, so he has become one of Guerilla's most powerful assets.

When Guerilla was working with the Council & 5th Column to recreate the super soldier serum that created him, his work was destroyed by Ace and The Vanquishers. After the incident, Guerilla vowed to get revenge on the team for their interference. He sought out Flashback, who also had an encounter with the superhero team, and agreed to work together to take them out. Eliminating the Vanquishers is currently Guerilla's top priority.