When a living creature dies, its spirit is released from its body and sent to the realm of the dead, a place sometimes referred to as Limbo. Most spirits are just passing through on their way to the afterlife realm that claims them - of which there are nearly infinite - but occasionally a soul will get helplessly stuck in Limbo, unable to find its home. Oftentimes, these lost souls become food for the countless number of monstrous, soul-eating demons that inhabit the realm. If one is really lucky, the demon who calls themselves Haros finds them first.

Haros, one of the oldest demons in Limbo, is quite unique compared to their infernal brethren. They serve as a savior to lost souls, protecting the dead from Limbo's endless horrors. The most immediately noticeable difference between Haros and other demons is their humanoid form, suggesting some kind of kinship with humanity that none who know them fully understand, given their ability to take the shape of any symbol of death at will.

Historically, he is most known throughout Greek mythology as the being responsible for bringing souls across the river Styx into Hades in exchange for coin. This remains true today. However, Hades is simply one of many different afterlife realms that Haros helps protect, including Elysium, the Duat, Valhalla, and many more. He also doesn't always require payment… although, as a demon, he certainly has no objection to it.

The living world was never of much interest to Haros until the death of a man named Ethan Holloway, who would eventually take the name Limbo as his own. Ethan was a lost soul unlike any other. Normally, Haros uses their innate abilities to visualize a spirit's fate and find where it ultimately belongs; when they tried to do it with Ethan, they sensed a fate with no end, somehow intertwined with that of the whole of humanity. Unsure of what to make of it, Haros made a point to keep an eye on Ethan in an effort to protect the fates of those connected to him. When they discovered just how aloof and obtuse Ethan actually is, they took it upon themselves to train him to better understand the untapped power that he possesses. 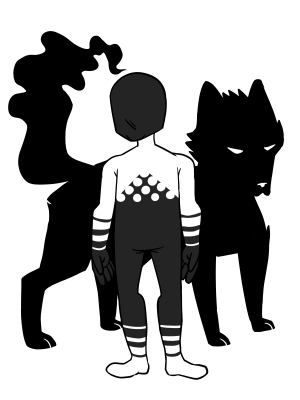 Ethan, an unprecedented case of a soul existing as both dead and living simultaneously, is permanently tethered to the realm of the living, which means he can freely travel between the two. He is constantly bringing Haros with him when he does. Haros, despite dedicating their entire existence to humankind, has found the living to be fairly distasteful. They generally keep people at a distance, often refusing to speak to any living mortals besides Ethan or the occasional deity. In fact, many of Ethan's allies believe Haros to be Ethan's pet, mostly because of the lupine form they take while in the living realm.

Limbo:
Despite frequently appearing annoyed at Ethan's astounding lack of competence, the two have developed a remarkable bond while training and working together. Haros will always answer the call when Ethan needs him. He may be the closest thing to an actual friend Haros has ever had, although he'd never admit it.

The Vanquishers:
Although Limbo is Haros' highest priority, all of Limbo's other teammates have proven themselves to be some of Earth's strongest souls. As Haros goes where Limbo goes, they end up assisting the Vanquishers with a lot of their missions, more often than not.

Elysian:
As an external protector of all afterlives, Haros has frequently worked with the Elysians to help protect their native realm Elysium. Raziel, one of the younger Elysians, has felled many monsters and forces of evil alongside Haros in the realm of Limbo over the course of thousands of years.

Stand-In:
Haros is directly responsible for the creation of one of Limbo's most notorious foes, the body-swapping ghost Stand-In. When asked why they killed Glenn Garrett that day, Haros simply claims that his fate could not be avoided.

Slasher:
The malevolent spirit of Mason Pflueger has evaded Haros for quite some time now, thanks to help received from Satan that allows him to evade Haros' detection. Haros believes Slasher deserves to be fed to the ghouls, causing a sort of contention between Haros and Limbo.

Osiris:
An immortal god who rules an afterlife called the Duat. Osiris and Haros have a mutual respect formed in battle together against the horde of monsters living beyond the realm of death. Limbo, who is close friends with him as well through the Vanquishers, has little knowledge of their history.

Blister:
As an acquaintance of Hecate, the goddess who has taken claim over Isabelle's soul, Haros has kept tabs on her soul to ensure that it gets where it needs to go when Hecate needs it. Haros knows her fate and sympathizes with her, which is why he is more fond of her than other mortals.