"My name's Nick Hyde, from Nowhere Important, Iowa. I don't really have a terribly interesting origin story. No murdered parents or anything like that. Although, part of me sometimes wishes that were the case."

As Nick's parents were especially strict they disapproved of most of his hobbies, so after he graduated high school when he told them he planned on moving to New York city and becoming a musician, they deemed his dream 'foolish and futile'. He disagreed. They cut him off and he hasn't spoken to them since leaving home.

"Bad luck is definitely my superpower."

His flight to New York was grounded in Paragon City when they found a shoe bomb on-board. His rental car broke down on the way to the motel he'd decided to stay at temporarily. And to top it off, he got held-up and robbed a day later. No superheroes came to his rescue. So with not a penny to his name and stuck in and unfamiliar city, Nick was forced to put his plans on hold. Indefinitely.

"So then I manage to get a job working as a dishwasher at an Up-N-Away Burger. Pay's not great but it was better than nothing. And then one day, one of the guys in the kitchen says to me, his cousin knows a guy who knows a guy who's looking for a few warm bodies for a job he's pulling. Now me, being desperate and of questionable morals at the time, said 'Sure, why not'. Funds were getting low and that gig just wasn't cutting it."

It turned out that Nick and his comrades out were really working for Armbar, an ex-Freakshow member who was ripping off Family capos' high-stakes poker games. Luckily, the job went off as planned, without a hitch. And that's how it started. A few more jobs here and there. Nick gained a reputation for being reliable, no-questions-asked kind of guy. And then, out of the blue one day, his buddy mentions he's been working regularly for an organization called TAROT, led by The Astrologer, a full-fledged super-villain bent on world domination. He asked Nick if he he'd be interested.

"I'll admit - the pay was great. But there's more than a few downsides. You're constantly being watched to make sure you aren't talking to anybody you're not supposed to be. Anyone you get involved with or close to can be used against you, so say goodbye to a social life. And the worst part? You're always on the clock. One time, this guy named Jake was late. The boss called us all together and ripped his spine out of his back right in front of us. Nobody was ever late again after that."

The upside to being a henchman however, is that all your needs are met. Free housing. Weapons and combat training. Even health insurance. The only requirement is unflinching loyalty and a willingness to die painfully or be banished to another dimension at any given moment. But the thing about super-villains? They lose. Often. Nick found himself jumping from one evil organization to the next every time a hero defeated their leader, which, while being a bit of an inconvenience, was never really terribly upsetting. And once you've earned a reputation like Nick had, finding a new job was fairly easy. There's always a super-villain in need of henchman. And variety is the spice of life, right?

"Literally every vacation you get is a work vacation though. You never get the chance to actually experience anything. I mean, I've never seen any famous landmarks and I've literally been around the world. TAROT's headquarters in Rome, Doctor Devastation's volcano base in Machu Picchu, King Helios' floating armory in Venezuela, even Herr Silverback's Monkey Menagerie in Germany. But I don't want to talk about that last one."

But eventually in life you come to a crossroads. And that crossroads came in the form of King Calamity, a megalomaniac who caused natural disasters and chaos for fun, many a henchman became uneasy with their employer's methods. After all, you can't make a living in the world if there's no world to make a living in. And as a henchman, you can't exactly file a complaint with human resources, so a guy's only option were to fake his death and hope for the best.

Fortune smiled upon Nick one day however, when the superhero known as Cliffhanger descended upon King Calamity, raiding his headquarters in an attempt to take him down once and for all. Nick, ever being the opportunist that he was, used the chaos as a distraction and stole a prototype stealth suit he'd been guarding to escape capture. 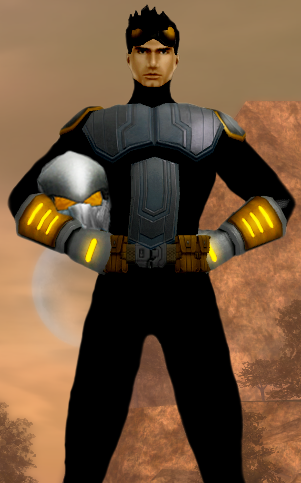 "You're probably asking yourself 'How does a no-nothing kid from freakin' Iowa go from dishwasher to one of the world's most notorious thieves?' huh. Well, when you jump from evil organization to evil organization you pick up a few things here and there."

Extensive training within various organizations has left Nick with a slew of skills and technological know-how.

Skilled Combatant: As a henchman many times over, Nick is well-practiced in several martial arts styles including Krav Maga, judo, Savate, as well as boxing and karate. Since acquiring his stealth suit, Nick has utilized all these skills and developed a fighting style that directly complements his suits capabilities, such as sneak attacks and disappearing and reappearing mid-fight.

Tools of the trade...

Stealth Suit: Nick's suit's primary capability is full-spectrum invisibility and complete stealth, both from the naked eye and high-tech sensors. Inside the suit are energy regulators that create varying fields that enable Nick to land soundlessly from heights of fifty feet. The suit itself is capable of absorbing kinetic & energy and redistributing that energy from his body in the form of concussive blasts. However, the suit can only absorb so much energy before Nick must release it.

Nick has upgraded his suit to mask internal sounds such as his breathing and heartbeat, and minimize his external body temperature. His suit can also be set to disrupt or override electronic devices via touch. Inside the suit's helmet are transmitters that can pick up radio waves, allowing him to tap into police scanners, a breathing apparatus that provides oxygen in oxygen-deprived situations and multiple vision settings including thermal, infrared and night-vision.

Utility Belt: Nick's utility belt houses ten pouches or cylindrical cartridges that are attached to the outside of the belt. Each of the ten pouches or cylinders contains various tools integral to Nick's heists, with the cylinders being interchangeable with each other depending on the scenario. Devices include a grappling gun, lock picks, miniature lasers as well as a taser.

While he's definitely not an outright super-villain, Nick is most certainly a selfish, cynical, and very opportunistic individual, who wouldn't hesitate to throw anyone under a bus to ensure his own safety and has, on more than one occasion, done so. Nick is not totally morally bankrupt however, regardless of how close to the line he is from time to time. Though many of his actions are morally questionable and he is primarily motivated by his own wants and needs, there is an inherently (semi) decent person beneath all his cynicism and ego. As a thief, he refuses to kill, though he doesn't dismiss gainful opportunities to work with people who do.

The Court of Plunder: A collection of thieves, pirates, urchins, black market traders and all other sorts of underworldly types who've created a religion out of upending the social order, one crime at a time. Nick fences his more high-end gains through this organization.