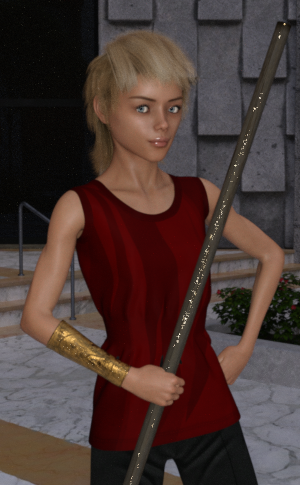 She was born Betrys, daughter to a happy couple. Her father was a minor merchant, her mother a healer – hedge-witch, some might say, using minor magics to help others and maintain a balance of give and take healthy for the environment.

All that changed before she was five. The mage wars started over something she had no idea of and wouldn’t be taught later – it being fairly useless for survival. Where magic was a healthy undertone of life before, now it was used for destruction – and drained quickly from the world. The balance of give and take was broken. The survivors huddled in what remained of the cities, quality of life slipping towards medieval levels. Outside the cities, there was no trade, no travel, nothing to sustain life. Most died within a three day journey – typically by foot.

There were other survivors, of course – other remnants of the mages’ armies, sorry mixes of human and beast bred to fight and die. Humans mixed with cat, with dog, with lizard and bird. These formed tribes, sometimes brought up to try to take the cities, or those who wandered too close captured for fights in the arena.

Eventually, as Ishku hit her tweens, her father and mother were taken – Ishku never found out why they were targeted, other than her mother’s ability with magic. She just remembered being told to run and hide, not forgetting her belt – a bit of cloth with protective magics woven in by her mother. She remembered being hunted for, and hiding in the arena crowd as the Lady of Mists executed her parents, using some sort of crystal on her mother.

She was captured a year or so later, a scrawny girl living on the street and desperate enough to try to steal some bread meant for the gladiators. She was thrown into the arena as sport, expected to die to the lizardmen held there before the "real" gladiators started their next match. To everyone’s surprise, she not only survived but came out victorious, her time on the streets having taught her the fine art of dodging and the rest – well, "pointy bit into the bad guys" was picked up pretty quickly. She was purchased and put into gladiator training, becoming a popular and lethal addition to many combats.

Ishku generally won’t talk about them, though she does hint at having had to kill a girl who was a friend of hers early on.

When the Guardians found her as the result of a dimensional misdirection, she was fighting in the arena – fighting to win her own life back so she could eventually die fighting in the arena instead of becoming some lord’s property, preferring that to playing host to another dead baby for the lord – no children having been born alive for years by this time, and there being few younger than her thanks to the result of the mage wars. Any use of magic now either required sacrifice (powered, sometimes, by the crystals used by the Lady of Mists, otherwise having it drawn from anyone nearby.)

Hearing there was another way to live and escape, she came home with them. Over time, she’s found herself considering Primal earth her home, moreso with her friends in the Guardians and at school and her new family, with two adopted mothers and her brother, Nakia, himself a champion, internet video celebrity and chef. She’s also taken up the staff over her former axe and shield.

Ishku can be blunt about a lot of things. She’s generally happy, even if she has odd ways of showing it at times, and can be matter-of-fact about things up to and including death that can make her seem very clinical. She’s not unaffected by them, she just tries not to show it.

The one thing that will get her going – and make her perhaps a bit afraid – are powerful mages. She still doesn’t entirely trust magic and has no interest in learning it herself. She’s become better – and faster – at evaluating the magic and the user though. And yes, she does like fighting Circle of Thorns.

Ishku enjoys music, though her singing voice is – solidly somewhat better than OK – and absolutely idolizes Amy Lee. She has a good ear, but her voice comes off a bit rough (she can pull off a good Cranberries number, though.) She can often be found at gRaves with her friend Lis, where she can shout and stomp around in the mosh pit having the time of her life.

Her makeup, when worn, and her humour lean toward the dark and dry.

She loves water and swimming, now that she’s used to it, and a weekend with mom or her family away from the city where she can see the stars is always treasured.

She tends to speak as precisely as she can. While she does use contractions, she still will tend not to, though more are making their way into her speech.

Her interests include: School, fitting in better, working out, MMA, basketball, swimming, dancing, stargazing, and whatever movies she can watch.

Mother ("Ma") - Mrs. Shadid. No, they’re not married or in a relationship other than "two moms." Long story that Ishku will say is not hers to tell.

No boyfriend or girlfriend. She’s generally not that interested in dating or relationships past friendship. Some wag at school suggested she’d probably just club the person she was interested in over the head and drag them off somewhere. Ishku spent a good ten minutes explaining matter-of-factly why that would be a bad idea, ending with "I would just ask. I, at least, am not afraid of being told no."

Her abilities are all due to training – which she continues, and which currently also include dance classes.

She can get the hang of most melee weapons pretty quickly.

Axe (with blunting on the front) and shield – retired, usually.

Collapsable staff – if you’ve seen the hand-size tube from Babylon 5’s Rangers, she has a few like this.

Armored suit/skirt. Good mix of protection and mobility, and an upgrade from what she threw together when first arriving here. Undersheath tends to be a black, armless bodysuit with some damage-resistant material. She has many of these, and will also wear these when working out or at dance. She’s comfortable enough in them to wear them casually, and considers this eminently practical.