The character of Jack Slayton was an idea in the back of Cyphre's mind for over a year and was finally created (from a renamed + repurposed old character on Freedom) to become an important part of the themed paramilitary SG, S.C.O.R.P.I.O..

If (when!) Dual Pistols come out for heroes, there will be a second version of Jack created. Probably a Dual Pistols/Kinetics Corruptor

He is meant to be an "international man of mystery" of sorts, one of those old cold war super spy types who has adapted very well to the modern technological age. Inspired by Nick Fury*, John Clark, John Lynch, Ben Santini, Sam Fisher, Holden Carver, James Bond and those awesome Dos Equis "most interesting man in the world" commercials.
"He's a lover, not a fighter, but he's also a fighter, so don't get any ideas"
"He once punched a magician. That's right. You heard me."
"When he orders a salad, he gets the dressing right there on top of the salad, where it belongs...where there is no turning back."
* Yes, yes... I know... the eyepatch. What can I say? I like it. It looks cool. *shrugs*

Jack Niles Slayton was the second child of three born to Ruth Ann, a nurse, and Robert James Slayton, a decorated American soldier who went missing in battle during the final year of World War I. He was a clever child who adapted well to the rough Chicago neighborhood in which he grew up. After running with bad crowds throughout his teens, he sought purpose and enlisted in the Navy with the start of American involvement in World War II, rising quickly to the rank of Senior Chief Petty Officer. In the European Theater of operations, Slayton led into Normandy a band of US Navy Underwater Demolition Teams (UDT), the precursor to Navy Seals.

Slayton remained on active duty through the Korean War, during which he was chosen for a classified mission that garnered him a battlefield commission and promotion to lieutenant. Slayton spied for various governments in Viet Nam in the 1950s, earning him the rank of captain and eventually a full-time appointment to the CIA's Strategic Services Unit (SSU). After spending most of the 1960's and 1970's working intelligence and black bag jobs within the CIA, Slayton retired under vague circumstances and disappeared from the public eye altogether, only to resurface in the 1980's as an operative within the mysterious organization known as 'The Midnight Squad'. The nature of his duties while associated with this organization remain unclear to this day. It is assumed he was involved in some manner of troubleshooting and acquistitions work, though, as it was during this period that he lost his right eye. 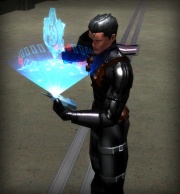 Listening in on the PPD

Since July of 1992, Slayton took to running a half-way house called "Operation: Nextep" he privately financed in the poorer neighbohoods of Paragon City's King's Row and Brickstown districts and seemed to have completely disconnected himself from world affairs (though it should be said that this is considered by some to have possibly been a front for other covert or vigilante activities... and indeed crime has dropped significantly in the neighborhoods in question). Whatever the case may be, everything in Slayton's life seems to have changed at the onset of the Rikti War, when Jack rejoined his friends in The Midnight Squad, battling the alien invaders.

Slayton was approached by his friend and former SCORPIO Executive Director Paul Grant in April of 2006 regarding the formation of SCORPIO and shortly returned to his roots as a field operative performing undercover work, special operations and recruitment as SCORPIO's Spec-Ops divisional captain... and has since become SCORPIO's current Executive Director.

An extra-governmental intelligence and security organization formed to meet the rising storm of exceptional threats beyond the usual scope of normal law enforcement and military forces. SCORPIO is dedicated to protecting the nations and peoples of Earth from terrorists and all technologically-advanced, extraterrestrial, psionic, superhuman, occult, paranormal and supernatural menaces, and often assists 'superhero' organizations in apprehending threats to national security and world peace.

Grant and Slayton built S.C.O.R.P.I.O. from the ground up as a streamlined agency small enough for them to personally oversee and protect from corruption. It has since very quickly grown into one of the world's most powerful paramilitary and intelligence protectorates, reaching covertly into national governments and forming strategic alliances with intelligence organizations and superhero groups... though always maintaining independence and deniability. Though distrusted and disdained on some levels by the somewhat boy-scout-ish superhero community, SCORPIO has become a valued contact when government-related information and jurisdiction is required to deal with a crisis.

Now that Paul Grant has left the organization, Slayton and the other SCORPIO Officers report solely to a secret international council referred to as "The Nine", made up of 'power players' whose identities remain unknown except to the presidents of the countries to which they belong. Though initially uncomfortable with this situation, Jack has since accepted it as he is afforded almost complete autonomy... which he considers a necessity in this line of work.

Slayton is a complex individual, most likely stemming from the experience, wisdom and insights gained thought his unusually long and action-filled life. A man of few words, he's a hard read. Though SCORPIO Psi Agents couldn't crack him during routine entry psych exams... other measures were employed to varying degrees of success. Tough, authoritative, analytical and very self-assured, he can also seem aloof and mysterious. He enjoys working in the background and is driven to always get the job done. As a covert agent, Slayton approaches his work in a brusque, no-nonsense manner, but maintains a relatively light-hearted relationship with his colleagues and sometimes with his momentary hostages... even when is about to kill them.

Jack hasn't much patience for political maneuvering or bureaucracy. A realist, he maintains a cynical and sarcastic sense of humor about the morally ambiguous nature of his work, yet he is also highly loyal and a staunch believer in the ideals his work ultimately protects. He is quickly angered by the casual killing of civilians or unarmed military personnel and police by his enemies.

Jack's semi-dark sense of humor seems to be a coping mechanism, his way of dealing with the tension that he feels during stealth operations and other missions. While he is very a competent and experienced soldier and operative, he is also sharply aware of his own limitations and mortality. He utilizes dry wit to help keep himself calm in the dangerous situations he is often called upon to enter.

Still strongly influenced by what he considers his 'formative' years, the 1950's and 60's, Slayton is still a bit of a ladies man and seems to enjoy women and scotch as much as he does his work... and always has plenty of both around when not on duty.

((CLASSIFIED))
Slayton has secretly suffered from a mild form of Dissociative Identity Disorder, which first manifested in the early 1980's and he has had under tight control for close to twenty years due to a strict exercise and meditation regimen and strong medication.

Jack Slayton has trained in the SEALS CQB, and is a weapons and demolitions expert and vehicle specialist. Slayton has also completed Green and Black Beret Special Forces training, and has been an agent of the Strategic Services Unit (SSU) and a liaison of the British Secret Intelligence Service (SIS). He is a seasoned unarmed and armed combat expert, and holds a black belt in Hapkido and has studied extensively in Wing Chun Gung Fu.

Jack's work relies at times upon non-detection and he is quite adept at blending into shadows and moving silently. He is able to sneak up on most enemies undetected and subdue them using either lethal or non-lethal means when he needs to do so.

Mutation :
Jack is a mutant, his genetic "gifts" reportedly first appearing in his twenties. His primary mutant power is the ability to absorb all forms of kinetic energy and store it within the cells of his body. This ability is passive, allowing him to absorb energy at all times. As a living conductor of bio-kinetic energies, his mutation has increased his speed, stamina, agility, and reflexes to the peak of natural human capability as well as enhanced durability, resistance to poison and injury... thus his aging process has been slowed to around one-fifth that of a normal man and continues to slow further over time as more energies are stored. Now in his 90's, Jack looks to be around 40 years of age, though his hair has started going dark grey. In addition, this bio-kinetic energy creates a persistent static interference around his person, making him immune to most telepathic probes.

Slayton also has the ability to concentrate his stored energy into his hands, manifesting as a bright glow around his clenched fists. So concentrated, his charged fists can smash into their targets with superhuman hardness and impact... delivering devastating, energy-enhanced blows, yet his hands remain impervious to pain and injury while charged.

• Equipment •
"The man with the best toys wins." - Jack Slayton 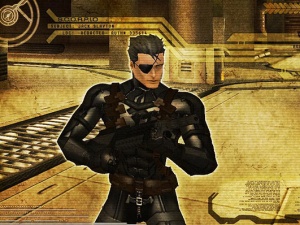