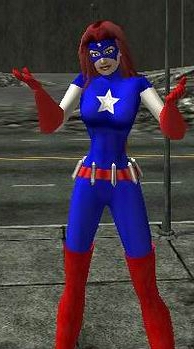 Liberty-Lass is sort of a tribute to one of my favorite comic book characters, Captain America. Likewise, she as a character also idolizes Captain America (either as a very real part of her world in her original incarnation, or as a fictional character within the City of Heroes game setting).

Often looked at as the "goody two shoes" of a group, Libby is a straight-forward woman who fights for what she believes in. Her unabashed patriotism makes some feel uncomfortable, but most people come to respect her sincerity and genuine concern for the well-being of others.

Liberty-Lass's powers are less spectacular than one might expect. Not truly invulnerable or super strong, she instead possesses a unique combination of martial arts.

Sometimes, when expecting heavy combat against foes with superior firepower, Liberty-Lass dons a special costume with extra padding and highly damage resistant fiber to protect herself from lethal attacks. Usually, she relies on martial arts techniques that enable her to roll with the punchs to minimize the damage to herself. She has learned from instructors in aikido, judo, and boxing. Her skill allows her to turn her defensive posture into an offensive advantage.

Though she has studied with other forms of martial arts to hone her defense, Liberty-Lass lashes out with a brutal onslaught of punching techniques learned from a former lightweight boxing champion.

Using high tech gear, Libby has gained the power of flight through the miracle of rocket boots.

Liberty-Lass spends what little free time she has in a rigorous physical regimen designed to keep her in peak physical condition.

Sometimes, when a situation merits it, she packs special equipment such as a taser, beanbag gun, infrared goggles, and --while hunting undead-- a magical shotgun. She keeps this special equipment stowed away in a secret location unless expecting trouble that requires a specific tool.

When caught off guard, she is as vulnerable to harm as anyone else.

Her interest in the law began early in high school and she earned a full scholarship to Paragon University. However, her interest in justice goes much further back. As a young child, Libby's imagination was sparked by masked heroes --her favorite being a comic book super soldier who fought in World War II.

A vicious assassin who relies on hi-tech weapons and ninja-like martial arts, this villain has displayed an irrational hatred for for Liberty-Lass since she first appeared at The Zig. No one knows whether or not she was there to help Arachnos break someone else out or if she was their target. During the chaos of the prison break, she walked up to a security camera and issued a challenge assuming it would get back to Liberty-Lass. As of yet, the hero has no idea who this mysterious foe is or what her grudge is. 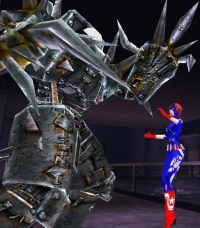 In the Praetorian Universe, Libby Prescott found little time to persue an academic career. One of the few noteable heroes on her world, she was a renegade that fought Tyrant's minions. Unfortunately, her efforts drew the archvillain's attention and he set out a trap to crush her. After following a lead to a rundown apartment building, Liberty-Lass found herself face-to-face with the deadly Bobcat... Tyrant himself watched from the shadows and gave the order to kill the hero after she suffered a brutal beating. Before Bobcat could deliver the killing blow, a portal opened between her and the nearly defeated hero. Out of the portal stepped another Liberty-Lass --this one from a dimension named Earth-Justice. A true super power, this Liberty-Lass possessed real super strength and invulnerability. She exchanged confused glances with her doppleganger but quickly set to work on Bobcat and her minions. Tyrant's voice issued from the shadows again, "Kill them both!" Dominatrix, who'd been standing at his side joined the fray. The Praetorian Liberty-Lass was a true scrapper and would have gone down fighting, but her super strong counterpart told her to go through the portal to take her place... that her world still needed her, but this one needed her more. Emphasizing her point with a footstomp that sent both Bobcat and Dominatrix reeling, the inexperienced scrapper went through the portal, the last she saw of her homeworld was an angry Tyrant emerging from the shadows and a knowing smirk on her twin's face. Back on Earth-Justice, Portal Corps technicians were shocked to see Liberty-Lass return seconds later and in a somewhat different costume that showed grievous claw wounds. After relating her story and explaining how their world's Liberty-Lass traded places with her, the technicians tried opening the portal again to send other heroes back to investigate... only, at the time, they were unable to establish a connection due to interference on the other side. Frustrated at her inability to help, Liberty-Lass got acquainted with her identity in this new, much friendlier world. Not knowing whether or not she would have to someday return home or stay here permanently, she joined a supergroup known as the Defenders of the Constitution so that she would have allies to grow stronger with to be up to either challenge. 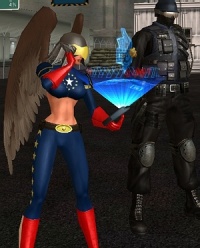 In an alternate universe Portal Corp has labelled Earth-Freedom, Libby Prescott is formidable opponent in both the streets and in the courts as a respected attorney. In the Guruverse, however, her life is still just unfolding before her. She is not yet an attorney, but is still attending law school and temps as a paralegal to help pay the rent. Born and raised in the Rogue Isles, she managed to make her way to Paragon City where she felt she could make a difference. Using equipment she found stashed at an abandonned warehouse, she fashioned herself a patriotic-themed costume and took to the streets to fight crime as Justicehawke. Having abandoned the high tech gadgets, she has become more self reliant and usually carries only a shield to protect herself.

There seems to be a Liberty-Lass in some form or another in every known alternate dimension that isn't exclusively populated by slimey ooze monsters. Some have met a fate shared by their world while others perservere in the fight against injustice in different ways. 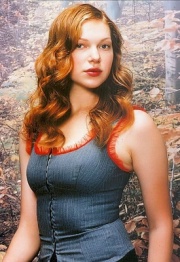 In a feature film, the part of Libby Prescott/Liberty-Lass would ideally be portrayed by Laura Prepon. Writing such a film, I would choose to make it about her original team, Command Five, as they were portrayed in the original Marvel pen & paper RPG. Her co-stars would (preferably) be Bruce Campbell as the telekinetic powerhouse called Major Muscle, Tim Daly as the accidental super genius known as Blue Star, Kiera Knightly as Gingersnap, and either Jason Lee or Sean Willian Scott as the mutant master of sound, Sonix. 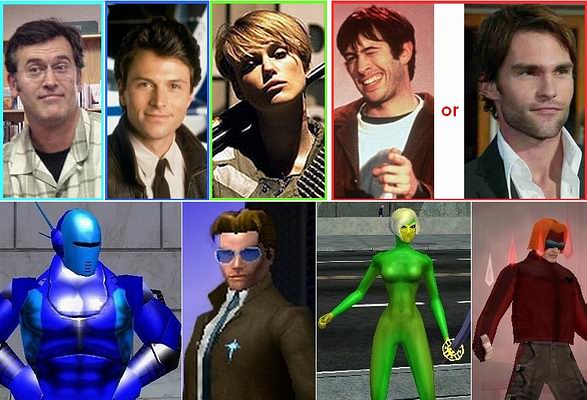