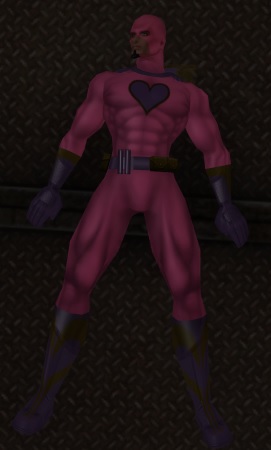 Lovdeep was born a second generation to a Punjabi Indian father and Pakistani mother. His father was a small albeit successful business owner, and provided their family with a relatively comfortable middle class lifestyle. Sans the typical trials and tribulations, his first few years were not unlike that of his neighbours of the Sikh community. It wasn't until shortly after his 12th birthday did life drastically change. On his way home from the corner store late one night, a van would pull up beside him where a handful of masked unknown men abducted him and drove off. The days following his absence, authorities would initiate another missing person's amber alert after a witness came forward and claimed to have partially seen the abduction.

Despite their efforts, no one would ever see Lovdeep again. The boy was smuggled across the border and taken to an establishment known as the Institute of Psionic Programming and Development; an operation with the sole intent on creating psychic super-soldiers and agents to provide services for a variety of shady organizations that paid the right price. Their methods of forcefully provoking the development of specific parts of the growing brain using a combination of illegal, untested drugs, serums and psychological programming resulted in a 98.5% failure rate; the stress of such tests and alterations too much for most of the preteen children to handle.

Lovdeep would be one of the (un)lucky few who managed to not only survive the initial process, but exhibit success in his demonstration of psychic-powered development. The serums forced into his body permanently altered himself and other success stories; the primary quirk being their documented development of the 'Psychic Vampirism' phenomenon. The collective lives of the batch of 20 children consisted of only psychological grooming, superpower tests and training in fitness, combat, weapons, espionage, computing and a variety of other skills designed to measure each agent's strengths and weaknesses, and develop them accordingly. Lovdeep, dubbed I.P.P.D. Agent 11, traveled across the world to complete a variety of nefarious tasks for the highest bidders like all the others - until the project's end.

Eventually one of the agents managed to break free from their conditioning and go 'AWOL', the sloppy trail leading the secret authorities to the I.P.P.D.'s base of operations where multiple arrests and charges were made, the establishment completely closed down and a full investigation soon followed. Lovdeep, much like all the other agents, remained in the location of their last missions without any further instruction to push them forward. He just so happened to be in the Rogue Isles, succumbing to his damaged mind and going underground for several months. He soon re-emerged as the "Love-Tap" identity, though the circumstances surrounding this time remained unknown. During his apprehension in the middle of a bank heist gone wrong in Paragon City, his true identity was successfully traced to the I.P.P.D. project. The circumstances granted Love-Tap a pardon and the legal right to remain across the border on the condition he complete a rehabilitation program, and put his forced-upon powers to good use.

Prior to being abducted by the I.P.P.D., he was a shy boy that didn't even think about causing trouble. He showed an early interest in computer-related things, and... that's pretty much the one thing that crossed the boundary of adulthood. Several years of psychological reprogramming (torture) and physical conditioning (torture) has rendered the infiltrator we all know as Love-Tap a hot mess. He is charming, inappropriate, manipulative, witty, selfish, liberal, dangerous, open to risks, loves to gossip and couldn't care less about religion or rigid morality. The only way his brain knew how to cope with itself was to snap into a "I hold control and power through sex" phenomenon (or at least the idea of such), if only to keep him safe from facing the great pain that is buried deep inside his mind. A certain little caring, ethical and (genuinely) kind spark that flares up from time to time shows that there is still hope to crawl out of the prison of a shell his damaged psyche created.

Psychic Energy Absorption/Psychic Vampirism - Every single victim/psychic soldier of the I.P.P.D. are capable of (or more accurately have the constant urge to) absorbing the psychic energy of anyone they come into close contact or direct contact with, and storing it to fuel their own power. Depending on the amount absorbed at any given time, the repercussions range from mild fatigue to unconsciousness, though the former is much more common.

Tactile Psychokinesis - The psychic energy that Love-Tap absorbs from others can be converted into raw psychokinetic energy, in which he can utilize through the will of his body; empowering his physical attacks for extra kick, providing temporary protection from physical harm, or emanating as raw force capable of knocking his close-range opponents back a few.

Tactile Mind Control and Telepathy - By making physical contact with another, Love-Tap has the ability to access their mind, and even further control them if they're weak enough. This enables him to accomplish a variety of phenomena ranging from minor to major, and includes but is not limited to: thought-scanning, thought-inducement/memory searching/jump-starting, suggestion, lowering of inhibitions, forced truth telling, emotion-inducement, motor function/physical control/puppetry, or just outright physical and mental control and command altogether. This hold on other's minds will taper off over a few seconds if he is no longer near or touching his victim.

Mental Resistance - Love-Tap's forcefully induced psychic abilities has rendered him with a strong mental block, which makes intrusion or thought reading of any kind below surface level a feat in which only the more powerful psychics (alpha level or above) are capable of penetrating their way through a good fight.

Espionage and Infiltration - During his time in the I.P.P.D., Love-Tap's training and primary function was that of espionage; eavesdropping, snooping and spying. Sometimes it takes a little more than just snooping to get the job done, though. Sometimes one needs to go right into the apple's core.

Computing and Hacking - Love-Tap is a trained and skilled hacker, and boasts great knowledge with modern technology as a whole.

Unrequited Cloak - From his utility belt, he might activate his portable cloaking device to... what do you think? Go invisible.

Love-Dust - From his utility belt, he might grab a flimsy capsule or two full of powder that can easily explode on impact, temporary blinding anyone he throws it at. Also great for confusing diversions to buy himself time to escape.

Forget-Me-Nots - From his utility belt, he might grab a handful of caltrops and spread them all over the ground to pierce shoes and tires.

Heartsuit - That foofy, but perfectly-themed suit he wears is woven with a bulletproof and heat resistant fiber.

Close Range - Unlike most psychic-based metahumans, the utilization of Love-Tap's powers can only be accomplished in close range or direct contact.

Psychological Trauma - Look, he's clearly not the kid he used to be. Nowhere even close. He was handed a troublesome brain and personality disorder.

The Moves - Love-Tap seems to be very knowledgeable of things relating to sex. All the fetish names, all the underground communities... unless it's absolutely abhorrent, he's willing to carry on a conversation.