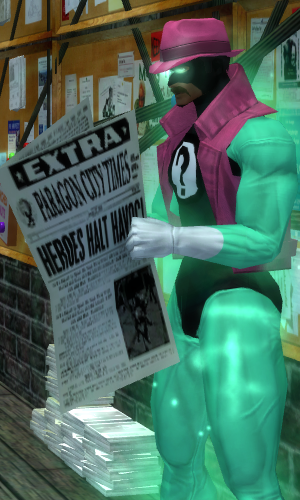 Award-winning journalist Mateo Ortega's career has left a lot of industry insiders scratching their heads in confusion. Many of his exposés have earned global recognition, making him one of the youngest, most in-demand people in his field. He could easily land himself a gig at virtually any publication of his choosing, yet he continues to reject those more traditional jobs to travel a more unbeaten path.

Even before his mind was awakened to the strange underworld of magic hidden away from most people, he always had a fascination with people living life on the fringes of society. Most of his work has involved him taking a deep dive into these places - homeless communities, prisons, psychiatric institutions, even cults - to bring awareness to the unique issues those groups of people face. What most of his colleagues don’t understand about him is that he doesn’t write about these stories for fame, he does it because the stories need telling.

When the case that changed his life first came to his attention, Mateo had no idea what he was really in for. It seemed pretty simple at first: an underground auction was being used by its high-profile clientèle to smuggle illegal goods and dirty money into the city. The tip was anonymous, but if true, it felt promising; it was Mateo's job to dig deeper for any truth behind the claims, and uncover the names of those involved.

To get a better idea about what was really going on, Mateo snuck inside one of the auctions for a firsthand view. What he saw were some of Paragon City’s most elite politicians, celebrities, and criminals all offering up astounding sums of money for a collection of ancient artifacts, each advertised as wielding mythical power. The main ticket item was a small statue, maybe a foot tall, of the Greek goddess Themis holding perfectly balanced scales. According to the auctioneer, it was enchanted with a small fraction of Themis’ power, and was originally used to bestow her truth and wisdom to the courthouse in which it was originally installed. It ended up being sold to a local city councilman for a hefty price.

Once the auction was over and the patrons had left, Mateo slipped his way into the storage room that housed the artifacts in preparation for transport. Perhaps if he’d taken the time to research the artifacts before doing so, he would have known better than to disturb them. It only took a slight touch for the Scales of Justice to lose its balance, activating the enchantment’s defenses and causing the statue to explode with a blinding flash of burning light.

When Mateo regained consciousness, the warehouse was in ruins. Police and paramedics were already securing the area, trying to piece together what happened there. Most of the artifacts were either destroyed or missing, which meant there was no evidence left to support his story. Mateo was given a clean bill of health before being released to go home, which is when he began noticing something strange.

The world he woke up to did not seem to be the same as the one he remembered. As he traversed, he spotted streets and buildings that he’d never seen before. Unnatural creatures wandered around in the open, completely unseen by the normal cityfolk around them. None of it made any sense. By the time he made it back to his place, his mind felt like it was splitting open. Eventually he would come to learn that the artifact’s enchantment placed a curse upon him, imbuing him with the piece of Themis’ power within it, essentially forcing him to see truth wherever he looks with the intent of driving him mad with that knowledge.

But Mateo Ortega is no stranger to the truth, as his entire life has been devoted to exposing it. He manages to maintain his grip on reality by channeling his thoughts into the stories he writes. However there’s no denying that the curse had a very real effect on Mateo’s psyche - he seems unable to stop himself from chasing whatever taste of truth he becomes aware of, often at the expense of personal and professional relationships with people who have secrets they want to keep.

Seeing an opportunity to use the power of the curse to do some good, Mateo adopted the alias Mystery and began publishing his discoveries on an independent news blog called Truth Matters, in which he is committed to telling stories that don’t get covered anywhere else. Oftentimes, his stories implicate powerful people who expense a great effort in trying to keep him quiet. Fortunately, Mystery, like the truth, always prevails.

Mystery works very closely with the superhero community to solve cases that venture into unknown territory. Truth Matters has become an integral part of disseminating the truth about what superheroes are doing to the masses in a world where villains and authoritarians thrive on misinformation and lies.

All of his reports are publicly available and free to view, and he interacts frequently with the people who follow them. Anyone in need of his help is encouraged to contact the Truth Matters offices for a consultation.

Loop:
A mysterious woman trapped in time with an unknown past. She reappears in the same spot every time she vanishes... which is the same place where Mateo got cursed. He knows there is a connection between them, but he doesn't yet understand how. She works with him running Truth Matters, and helps keep him from spiraling into insanity while he works to figure out the truth about who she is.

Scry:
A blind former member of the Circle of Thorns capable with his own special form of sight. He lives in Mateo's building and has become a crucial resource in many of Mateo's organizations. Mateo is extremely sympathetic of the trauma of Scry's past, which makes it easy for him to look past some of his more unhinged views and behaviors.

The Vanquishers:
Although not a formal member of the team, Mystery has worked closer with the Vanquishers and their allies than any other team of heroes, enough to be considered an honorary member of the group. They first became acquainted after he exposed Ace's father in a massive corruption scandal that put a huge target on Mateo's back. Anytime the Vanquishers need investigative help, he does his best to assist.

Limbo:
Limbo spends most of his days helping ghosts with their unfinished business, which Mystery has proven to be an invaluable tool for. Helping people find closure with the truth is exactly why Mystery does what he does, so his partnership with Limbo developed very naturally.

Blindsider:
When Incrediman was trying to have Mateo assassinated, Blindsider took sole responsibility for protecting him. For a week straight, Blindsider put his own life on the line to keep him safe, for which Mystery is overwhelmingly grateful. Anytime Blindsider needs Mystery's assistance, he doesn't hesitate to help.

Occultist:
Mystery's investigations frequently lead him into the world of the occult. Whenever that happens, there's no better ally to have than the Occultist, the master of magic. Mystery isn't well-versed in magical knowledge on his own, so Occultist has been a huge part in helping Mystery understand the things that he sees and experiences.

Smelter:
Mystery pays Smelter for information leaks and story leads. He was a huge part in acquiring the footage that was used to incriminate Incrediman, which makes him one of Mystery's more trusted intel sources.

Stranger:
The Stranger is an inexplicable entity claiming to be a detective who seems to show up for investigations that carry some kind of weight or significance. Whether or not he is actually helpful is debatable, but Mystery considers him a useful ally in the pursuit of the truth.

Incrediman:
Ever since Mystery implicated him in a massive corruption scandal around the Faultline disaster, Incrediman has had it out for Mystery. He is a very powerful enemy to have, but Mystery does not let himself get intimidated by Incrediman's oppressive fear tactics. At one point, Incrediman tried to have Mystery killed.

Suspense:
A deadly supernatural entity that exists outside of normal human perception who Mystery believes is behind a number of unsolved cases throughout the history. Mystery devotes a lot of energy trying to capture and stop this being with minimal success.

Avalanche:
Mystery has been a huge part in helping Avalanche unlock the secrets of the Aspects, an ancient order of elemental mages whose power Avalanche claims as his own. There is very little actually known about them, which makes Avalanche one of Mystery's more intriguing cases.