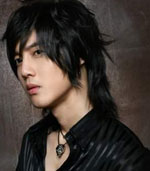 Siwon would be played by Yoon-ji Hoo

Jeong Si-won [Siwon[ (born May 23rd 1987) is a Korean singer known for his work with the band S.L.Y. Born in Seoul, Korea Si-won had always been the center of attention, even when he wasn’t he in essence through a fit until he was. He wanted to be a star from the very beginning and knew that he would eventually reach those heights.

His mother ( a figure skater) and his father ( a politician) indulged their only child in everything and anything their money could buy. He was enrolled into the finest artistic schools, helping to cultivate the raw talent that they themselves and others saw in the young boy. However, it wasn’t until he was 18 and enrolled in the Chugye University for the Arts that he finally caught a break.

During a student performance, the teenager was performing “Hey! Come on!” by Shinhwa he was scouted by a member of SM Entertainment. Immediately he dropped out of the college in order to work on becoming a star like he had always dreamed about.

It was about two years later when he met up with Lee Yoon and Kim Yoochun to form the group S.L.Y. The group garnered minor success, releasing three separate albums: “1 A Day”, “2 Hot”, and “3 in a Row”. Their fourth album however was never released due to scandal.

It was the Spring of 2010 when the story broke on a local music show. Photos of Si-won had been leaked throughout the internet. These pictures were with fellow band member Lee Yoon. Questions about sexuality and ethics flew as the media ran amok with the story. The band was immediately dropped from their label no matter what evidence was produced that the photos may have been shopped.

Depression hit Si-won hard, everything that he had worked for had been lost by the flash of the camera. It was a month later when a package arrived at his door, a note on it simply saying “from your greatest fan.” When he opened the box he discovered a strange looking crystal hooked onto a leather strap. It wasn’t something that he would have normally kept, but there was something about the crystal and the timing that made him immediately put it around his neck.

He continued his isolation, trying to avoid all of the media that was constantly on the outside of his flat. But, his health was taking a turn to the worse. He felt tired and nauseous. Eventually, he bit the bullet and left his home to try to see a physician. The moment he left his home he was accosted by the media. No matter how many times he yelled and told them to leave him the hell alone. That was when his powers manifested in the form of quartz crystals (of course, he would have preferred diamonds, but that’s another story). The next thing he knew everyone around him was trapped in solid crystals. As fear took over his mind, the crystals melted away, sparing the people that were trapped within. It was bad enough that he had just been in a homosexual scandal, now he was some kind of freak. He didn’t have anyone to turn to, so he headed for the United States, where he hoped the news of his scandal had not reached.

Once in America, he traveled from city to city looking for someone to help him with his problem. Eventually, he found a doctor in Miami, Florida. The doctor was the one to discover that his body had been in taking radiation from the simple gift he had received from the anonymous fan. He asked if he took off the necklace if that would change anything, but apparently it was far too late, all of the radiation had entered into his body. At his wicks end, Siwon demanded to know what he could do, the doctor simply told him to go to Paragon.