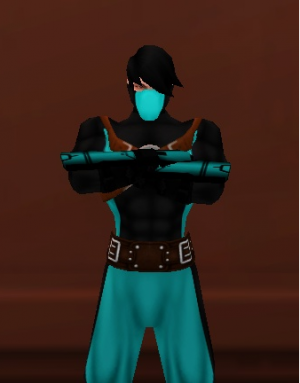 Travis Bellmoor was born on the east side of Beijing, China in the year 1992, on December 2. Travis was born into an American military family, his father being a Ranger in the Army.

At the age of 12, Travis left home and went to travel the world. He later ended up in Africa at the age of 13 and stayed there until 15, after his friend Elle had left, not telling him where she was headed. Travis left his temporary home and headed to Europe for a time before flying to the west coast of the states. From there he traveled east until he reached Paragon City. He now fights the good fight, having been convinced by his friend, Elle, to stay in the city and not leave.

記錄一: To anyone who finds these, my name is Travis Bellmoor. I was born in Beijing, China on December 2, 1993. My father is of American descent, while my mother is of Chinese descent. Yeah, that means I'm a half-breed. I'm the youngest of three kids, my sister being the oldest of us. My father was, and maybe still is, in the U.S. Military, so we didn't have to abide by the regular family laws of China.

I never really had any friends, no. This will come to surprise those that know about me either as I'm recording these, or in the future. I spent most of my young childhood playing video games or drawing some fanciful art stuff. If I wasn't in my room, I was walking the rooftops or the streets of the city. I use to sometimes walk them at night when the air was cool and the more rural areas of the city calmed down a bit. I never liked the interaction of most people. Guess that's why I left.

Unlike most people nowadays in this world, I didn't have a tragic past. I simply just left my home looking for adventure. Yeah, my parents were upset about it, but they accepted the fact that I just didn't fit in. They helped me pack my bags, gave me a credit card so that way I could pay for things, gave me some bus tickets, and sent me on my way. All I had was a bag of clothes along with the ones on my back and a journal.

I guess this will conclude the first tape. *The tape cuts out in static*

Traveling Around the World

錄音兩種: This is recording two of, well, I guess my life.

After leaving the comfort of home at the age of twelve, I went north to Mongolia. I stayed there for a few days before heading east to Kazakhstan. From there I made my way down south, having used up my bus tickets. I refused to buy more, wishing to use my money wisely and spend it on motel rooms and food. I simply hitch hiked my way down. Yeah, I got into a few bad cars, but that's part of the adventure.

I made my way to the southern part of Africa by the age of thirteen. By then, my money had run dry and my parents were no longer providing me with any. I didn't blame them, they probably thought I had died after going through Afghanistan (that's where my money stopped being spent).

One night, I had settled down in an alleyway with a cardboard box as my shelter. I was using a trash bag as my pillow, and another, torn-up cardboard box as my blanket. As I lay there, in my box, something amazing happened that never happened before; someone stopped and started talking to me. I pulled myself out of my shelter to see a young girl, around my age, and her father looking down at me. The girl, now known to me as Elle, convinced her father to let me stay with them for a while. He begrudgingly agreed.

So, the years went by. Elle and I became close friends, she taught me to speak her language, and her dad seemed to have grown fond of me. Then, one day, they left. I knew they were leaving, but I never learned where they were going. I took that as a hint that I should move on myself, so I did. I headed back north, to Europe. I first entered Germany, picking up even more of a fondness for history; particularly wars. I was always intrigued by the lengths people would go to to kill each other. Just, the mass destruction that left behind was amazing.

I'm getting off topic. During my stay in Africa, I learned of my capability to control and bend light and energy. Although I didn't have any actual control over it, and it wasn't very apparent, I knew about it. When I reached Germany, something sparked in my mind that helped unlock it. Once it was "unlocked," I began training it. I was able to bend the light around me into shapes and forms. This is called a "mirror image." I wasn't able to fully know about my energy until I reached France.

Once I reached France, I headed to Paris. Once there, I began training to "free-run," as they call it. As I was doing this, I was able to begin sensing the energy signatures in the ground. I could feel when people were moving around me, how big they were, what they were doing. After several months of "training," I left Paris, France, and caught a boat that was going down the southern tip of South America. I didn't stay in South America, no. I went up to the west coast of the U.S., landing in Los Angeles, California. I only stayed there for a day before I headed east to Las Vegas, Nevada. That's where I furthered my training into knowing the capabilities of my powers.

The constant movement and the twenty-four hours a day the lights were on heightened my capabilities. I began being able to solidify the mirror images I made, confusing anyone to who may attack me, or feel a few of my punches, as to which is the real me.

By the time I reached the East Coast, in particular New York, New York, I had a grasp on my powers as I made my way down to Paragon City, Rhode Island. I was nineteen by this point, becoming a full grown kid, I suppose. Once I entered the "City of Heroes," I was able to get ahold of a super suit to help me fit in better. One day on patrol, though, I walked into a familiar face. That face was Elle.

We talked for a bit, caught up. The next day, she proposed that I stay in the city with her. So I did.

Now, at this time, I'm sleeping on a couch in her apartment. Ever since I came to this city, things have been getting better and better.

錄音四: Recording Four: Weaknesses These are the things that may or may not have either pushed me into retirement, or....