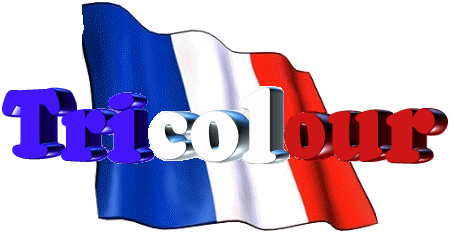 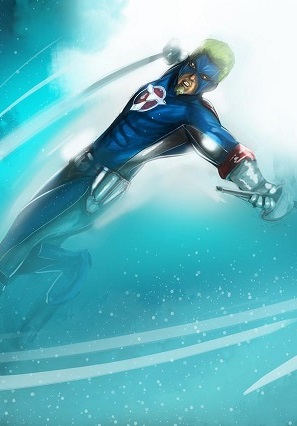 The original title of Tricolour/Le Tricolore belonged to French Freedom Fighter Sabrinne Giraudoux during the height of World War II. Prior to carrying this title, she was a national treasure and renowned fencer known for her unique, graceful yet precise style that incorporated her background in dance. She gained recognition in consecutively winning the most consecutive matches of any woman in European history through national and international competitions; Olympic trials making her goal clear in competing at the 1936 Olympics in Berlin. During the final match Giraudoux bested German opposition; a bittersweet victory that prompted the German audience to make their frustrations clear when a French woman had bested their own hero. Regardless, she would take her victory in stride, elegance and skill. The common audience were not the only onlookers however, as one man in particular found special interest in her skills.

Heinrich von Fraunhofer, a high ranking officer of a metahuman research program (eventually known to be affiliated with Storm Korps), stalked and cornered Giraudoux within her own quarters, successfully utilizing his psionic powers to hypnotize Giraudoux. He forced her into becoming an operative of the organization under his personal direction, and she was later deemed a missing person. Sabrinne Giraudoux would not emerge until a few years later as an assassin and terrorist, calling herself the "Belle de Vichy", confirming a tie to the Nazi Party, which Heinrich von Fraunhofer had merged what was left of his own organization into. The fact that she was still under the hypnotic influence was clear. Belle de Vichy quickly became feared as one of the most dangerous assassins of the Allied opposition, personally responsible for silencing dozens of rebel groups across occupied Europe for good. Only through sheer luck would von Fraunhofer's influence be severed. 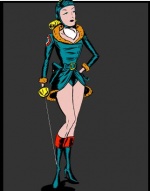 During a raiding of an underground rebel initiative smuggling information into the hands of British Allies, Belle de Vichy and her numbers apprehended the elusive leader Alexandre Aumont, and sentenced him to death in the face of a firing squad. The leader was granted his final words, in which chance he would proceed to sing the French Anthem. The meaningful words and melody were enough to snap Sabrinne out of the hypnotic state, where she then proceeded to free Aumont, and together they successfully disarmed and defeated the German soldiers. Feeling sheer and utter demoralization, bitter and betrayed during the first few moments of regaining her free will, Giraudoux caught a second wind and new passion.

She announced her true loyalty to France and at last joined Alexandre's initiative as Le Tricolore (or simply Tricolour to English-speakers), mistress of the blade and pride of France! Tricolour survived as a pardoned freedom fighter remaining in the fray of the second World War, letting her elegant swordsmanship speak for itself. As a couple Tricolour and Alexandre became somewhat of a legendary duo of their time, responsible for saving many lives during the fall of France, and even assisting The Dawn Patrol. By 1945 Heinrich von Fraunhofer was presumed to be slain, and they'd eventually marry in 1946. They would have one daughter soon after, Evette, who was the first of their immediate nuclear family that exhibited a mutation, the dormant gene passing from Alexandre himself.

Sabrinne Giraudoux died in 1995, six years after Alexandre passed away. During her last few bed-ridden years she would delight in sharing several of her heroic stories with her three young great grandchildren, the next generation of their ongoing family legacy. The youngest of which, Claude, was especially taken with the woman and the days of courage against the terrible World War, even at a young age. He idolized her more than he did his own parents or grandparents, who had also spent their lives balancing family and the way of life they came to know. Due to such a fixed fascination it was just as difficult of a loss, and the memories and stories remained fresh within his mind the older he grew, granting him the drive and hope to one day make just as much a difference to the world at large.

Claude and his older siblings were expected to develop mutations during the peak of adolescence in the same manner as their parents and grand parents, a pattern without fail in the family since Alexandre's induction to the gene pool. As predicted his two older brothers would develop special abilities coming of age, though through a most unusual circumstance, Claude did not exhibit any signs of a latent mutation like the rest of his family during adolescence, and would fail to throughout the remaining teenage years. Contrary to general culture, Claude felt like the outcast of his own family for lacking any metahuman traits despite still being quite young, a fact that caused a personal rift between himself and his family, and conjured feelings of unworthiness. This malaise would not last long, and through determination in still being strong enough to one day stand by his family's side as a heroic figure, Claude would look up to his Great grandmother, Le Tricolore - the heroine that achieved greatness without the metahuman condition.

He would vow to become just like her, and took up fencing at a young age through great insistence before his parents. It soon became evident that he was a prodigy of swordsmanship, and his interests went far beyond just a single style. For years Claude would persevere and stick to his chosen path as if having acquired the natural talent from birth; advancing in skill and magnitude mirroring the training his two brothers were inducted in. Growing in confidence and affinity, he would begin to study alternative styles, techniques and complimentary art forms. Though it rewarded C.D. with some slack, especially from his brothers, he was adamant in becoming involved with ballet and contemporary dance classes to try and recreate his great grandmother's own elegant style. Though difficult would prove to make him a more effective duelist and fighter. What never was a hobby became his very life beyond just the completion of school alone; his only true social life residing in family, PR people and combat, dance and gymnastics trainers. Claude developed a mild inferiority complex while in the presence of his brothers, and often challenged them to sporadic combat scenarios and tactical training sessions within the family home.

The final test to push himself and ease his own self-consciousness in believing he was worthy to join the family's revised super group, known as Le Bouclier Bleu, on a full-time basis came when Claude successfully revived the title of his Great grandmother, taking the alias Le Tricolore/Tricolour to honer her legacy. However, after only a couple years with Le Bouclier Bleu, he was prompted to relocate across seas to settle in Canada to train there in peace during his last year before the Olympic games. He first settled in Quebec City, though soon ended up living in Montreal among the majority-English speakers, though studied both official languages equally. A little later, Tricolour received a distress signal from a contact which lead him to Paragon City, and in getting a feel for what the city was all about after all was said and done, he decided to go through the motions to register as a hero and further his skill and name on the streets of a foreign city. To gain the respect of strangers was to gain the confidence to live up to the Tricolour name.

During his younger days Claude-Destan's inferiority complex was a big problem; prompting unnecessary friction with his own family and leading him into dangerous situations just to prove his self-worth. Though some of that insecurity still remains inside him, the worst at least died down during his twenties. Claude-Destan is known to be relatively approachable and charming while making new acquaintances, believing in the "put your best foot forward" approach to social life. He's assertive, emotional, compassionate, competitive, stubborn, opinionated and sometimes two-faced. C.D. isn't immune to provocation, and 'can' have quite a foul mouth. His sense of humour can sometimes throw others off when it becomes dark, but nothing could ever tarnish his French heart of gold. Tricolour believes in second chances, and sometimes even third chances. Three strikes, they're out! There is more to his character that one needs to discover for themselves.

Like his entire nuclear family, Claude-Destan was born with the metahuman gene. Unlike the rest of his family however, it remained dormant and never manifested.

Swordsmanship and Combat - Tricolour's primary title is that of an Olympic-level athlete as Claude-Destan Nouvel, though he is an all-rounded impressive swordsman, considered one of the best in the entire world and a literal prodigy of the craft. Though his roots are within the beautiful art of fencing, his training and prowess far exceeds this one particular style. Tricolour is capable of utilizing multiple styles of swordsmanship; an expert or highly proficient in at least five different styles. His trademark, personal two-handed style is the incorporation and combination of kendo, fencing, rarer medieval techniques, dance and acrobatics all in one. He has proven to be more than an effective melee combatant and can hold his own or even best adversaries he comes across that are "enhanced" or "super-powered" threats. He prides himself on being nearly as elegant as the first Tricolour.

Acrobatics and Gymnastics - As mentioned prior Tricolour has also trained as a gymnast and acrobat, using these techniques mainly for defensive purposes and "flare" in his personal style combat. He has demonstrated a great degree of agility and flexibility, enabling him to more effectively avoid attack or shift his position to either maintain or acquire an advantage in combat scenarios.

Swords and Blades - Tricolour has possession of a variety of bladed weapons to compensate for numerous circumstances. He has accumulated a collection and variety of swords including sabres, foils, épées, shinai, spathas, long swords, basket-handles, katanas, estocs and everything in between. He's most commonly seen with his personal preference of dual sabres or rapiers as his main choice of everyday combat weaponry. The actual blades are used only in dire circumstances that call for them, otherwise the blades are dulled or fixed with safety devices, used more so with blunt jabbing, thrusting or non-lethal cutting techniques opposed to being used for lethal assault.

Combat Uniform - Tricolour makes use of the latest in protection wear; his symbolic costume is made with a woven heat resistant and bullet-proof material in order to prevent excessive harm. His utility belt is equipped with his sword sheaths and also has room for miscellaneous items, such as situational communications devices or other objects of importance.

Mortality - Tricolour possesses no special forms of durability or longevity, and remains as vulnerable as any other man of his lifestyle.

Inferiority Complex - The trials of growing up not-so-super in a famous French family full of supers has drilled a constant, if not subtle in modern day, inferiority complex, especially when it comes to performing alongside or against super-powered individuals that he needs to prove himself against with his own natural talents.

Dance - Though not focused upon to the degree of his swordsman training, Tricolour does possess an educational and professional background in dance, choreography and performance, which as mentioned earlier he incorporates into his own unique fighting style. He specializes in ballet, contemporary and ballroom.

Bilingualism - Tricolour is fluent in French as his first native language, and English as a second language. It should be noted that he's also fluent with the Quebecois (French-Canadian) variant as well, warranted due to some of its differences contrary to ignorance.