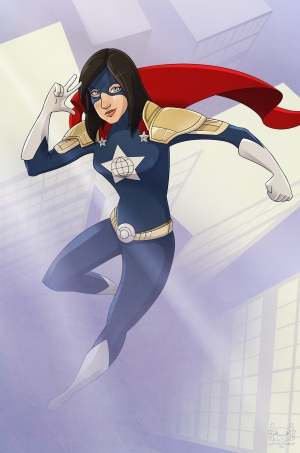 It all started back during the Cold War, when many of the West's Finest were covertly dropped behind the Iron Curtain, skirmishing with Communist Heroes and stealing valuable secrets. It was when an atomic scientist exposed himself to harmful nuclear radiation and became Doctor Prism, that would eventually become the reason for his grand-daughter's mutant abilities. When Doctor Prism died in 2012 of cancer, his close friend, the Vietnam War-era super soldier, the All-American, persuaded Miranda to take on the mask and become a hero like her grandfather. A year later, the aging super soldier had a new sidekick, All-Star! She fought beside him for five years until he retired.

No longer a sidekick, and now on her own, All-Star forges her new destiny. At age 24, she is struggling to juggle her college life, internship, and her heroic persona at the same time. She has set up many social media accounts as All-Star to easily connect with the normal day-to-day people that look up to these heroes.

In the late 1950s, Doctor Ryan Haas became accidentally exposed to radioactive nuclear fallout from one of the rockets he tested out in New Mexico. The radiation warped his genetics in such a way that he could emit light from his body. Once the medical doctors reported that he had became a meta-human, Haas was drafted into government service as soon as he got out of the hospital, thanks to the Might for Right Act. The CIA turned the atomic scientist into a full-fledged spy and routinely sent him over across the Iron Curtain to disrupt Communist activities. Adopting the moniker, Doctor Prism, Haas would bend light to his whim and cloak himself to get behind enemy lines and steal Soviet secrets that were vital to the CIA. The game later changed for Haas when he was assigned to partner up with agent Dale Rowland, the All-American.

Dale Rowland started out as an eager U.S. Navy officer, ready to do his part for his country. It was 1965 when he was taken to Vietnam. When a North Vietnamese meta-human and a squadron of Russian MiGs staged an attack on a stationed U.S. fleet, Rowland and the rest of the crew of their battleship were helpless to defend from the onslaught. The meta-human sunk the ship, but Rowland led the charge to help his crew mates flee to safety. His bravery in action was accounted for and he was soon contacted by General Thaddeus Williams who brought Rowland into a secret government program, one of the many super soldier programs that the United States conducted during the Cold War. The X-76 Formula proved a success and boosted Rowland's strength, endurance, and speed. But, General T. Williams was not done with his test subject. The general subjugated the soldier with scientific methods that were brought over from Project MKUltra, providing Rowland with the telekinetic ability to fly. It was then that Rowland was given to the CIA. The CIA trained him with all the important skills he needed to survive the shadow war between the United States and the Soviet Union. The government gave him the code name. 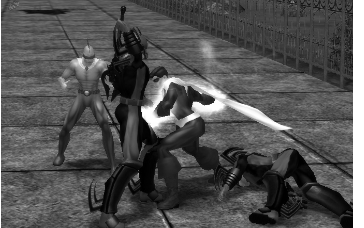 The two superheroes, the All-American and Doctor Prism, were paired up by the CIA. To the public, they were never as popular as the heroes of the Freedom Phalanx or the Dawn Patrol, but they were seen as two honest men, trying to right the wrongs of the world and defeat, not only the communist threat, but the spurring Nazi villains that still lived on decades after World War II, and the costume-clad villains that popped up declaring their master plans of conquering the world. They were just two American superheroes doing what they did best: fight crime and injustice. But, underneath all of that were many secret and dangerous missions. From the jungles of Southeast Asia to the cold wastes of Siberia, the All-American and Doctor Prism waged a war against the Soviet Union's meta-human supergroup, the Soviet Defenders of the Motherland.

The villain Mikhail Novakov, or Doctor Nova, was a genetics master. Doctor Nova was one of the many key scientists that the Soviet bloc had in creating meta-humans. Though, many test-subjects were malformed and disfigured, some successes arrived to put the Western powers to the test. Often, All-American and Doctor Prism would skirmish with Doctor Novakov's designs, creating a seemingly endless cycle of defeating one creation and having to defeat an even stronger one the next. One thing was for certain, that Nova was learning from his mistakes. His creations becoming more and more perfect, more human, than the last. That all ended in 1985, when the Superhero duo raided Doctor Nova's Observatory hidden deep in the Ural Mountains. There, they fought through waves and waves of experiments that were admitted strong doses of cosmic energy. Upon reaching Novakov, they had discovered that he was a weak and frail man. But when the Soivet scientist fell through an artificial gravity well, the two United States agents returned home, only to be seen as heroes for that day to the men and women of proper security clearance. Doctor Prism retired while the hero, the All-American, continued to serve the United States government.

Miranda Cassel grew up in the quiet Paragon City neighborhood of Jannissey Heights. The neighborhood only had seen few major conflicts as Miranda grew up: The Rikti War, and the Council's attack on a Congressman. Watching from her neighborhood, seeing heroes fly into action truly inspired her to become great. In Paragon City, it never felt strange to live in a family that once had a superhero. It was a fun story to tell. Other than that, Miranda lived a pretty mundane life until her powers manifested when she reached high school. She gained the powers of manipulating light, almost mimicking her grandfather, who could emit light particles from his body, Doctor Prism. But, Miranda never wanted to be a superhero. Fighting crime was deemed too messy for her. She wanted to help in other ways, so she studied to try to become an English teacher.

That feeling changed when her grandfather was diagnosed with cancer, lying on his deathbed in the hospital. His last wish for her was vague, but he wanted her to make the world a better place. Dale Rowland, the All-American, later came by to check on his dear old friend. He was given a wish, too. That he would take Miranda as a mentor and train her to be the next superhero. At the funeral, the All-American brought it up to her and gave her some time to think about it. Half a week later, Miranda accepted the challenge to become the All-American's sidekick.

The All-American and All-Star

Photokinesis: Born with mutated genes thanks to her grandfather's atomic mishap, she gained the ability to manipulate the photon particles around her. GIFT and SERAPH scientists labeled her as a photokinetic. The All-American took her to many professionals to let her master her powers. She has had over 5 years of training.

Enhanced Strength: Another genetic trait she developed was super strength, though she has limits and she is not the strongest patriotic hero around. Her mutant strength makes her capable of lifting around 800 pounds.

Martial Training: Training closely with Freedom Corps instructors over the years, Miranda has gotten pretty good at close-quarters combat. She's been trained in Krav Maga, judo, and mixed martial arts typically taught to Longbow recruits. She is by no means a master in any of these forms, but as a hobby, in her secret-identity, she has been taking Tae Kwon Do classes in Talos Island. Not the most efficient style for combat, but definitely the most fun.

Tradecraft: Being that the All-American worked with the CIA for many years, he gave Miranda many, many lessons on espionage and intelligence gathering. Though she knows that wearing a bright red, white, and blue costume makes her stick out like a sore thumb and she won't be acting as a covert agent anytime soon, these spy tactics have come in handy for dealing with crime fighting.

Star Band: Her belt was made by Carson from Icon. Inside each metal segment is a compact pouch which can hold things like a cellphone, mediporter, business cards, autograph cards and pen, ziptie handcuffs, micro binoculars, and the Wondercomm.

Wondercomm: With a sleek, golden finish and absolutely no remains of the insidious code from their previous owner, the Wondercomm has been reverse-engineered from the heinous Dr. Handheld's Viewscreens of Death.

“Having All-Star on your side is like having a whole team of back-up! She's wonderful!” - Medicate

“First things first. All-Star? More like no brains! I didn't rob that record store, I was on a date, and this... ZERO! Ruined it. She trashed the store, was ALMOST hit by a truck, by the way I saved her, and then tried to arrest me. I did nothing wrong! But I still did the time? Is this Justice? I think not. This is a bias that I'm not willing to tolerate. So I'm going to kill All-Star. And then freeze the city. Also it's not a freeze gun, it's a freeze RAY!” - Frosty Chill

The All-American and All-Star started out as Mutant and Masterminds NPCs in a game I ran with my friends. Literally, they were just Superman and Supergirl analogs, where All-American was a hero from the late 30s and became world famous. All-Star just sort of tagged along. She didn't really have an epic backstory. She was mainly just a mutant who could shoot energy beams at people and a cheerleader from Texas.