The War Mask of a Swordsman of Marad serves as both decoration and utility for the warrior who has yet to prove himself to the world he currently inhabits. Anthrak's War Mask covers his face and jaw; its crimson visor analyzes the conditions of battle around him and relays that information to the interior display through which the world is filtered for him. It is never removed, for any reason -- even when eating he merely unhinges a panel to allow access to his mouth. The War Mask is to be worn until such time as he has proven himself and reached the pinnacle of status among his fellow "warriors" of Paragon City; then, and only then, Anthrak will go unmasked.

That time has come.

Anthrak's circulatory system is infused with microscopic nanobots that ensure his body operates at peak efficiency at all times. They repair injuries and toughen his flesh against incoming blows in accordance with the data they receive from his sensory input. Their programming allows them to interpret his brain's impulses, and as such he can direct them to focus repairs on those parts of his body most necessary to maintain his fighting prowess in the midst of battle. He can also direct them for the purpose of accelerating muscle response and increasing output for bursts of swiftness and strength, used both to gain an edge in battle and to travel in tremendous leaps and bounds. 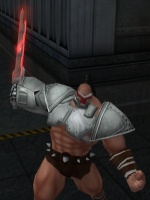 Anthrak wielding his weapon of choice.

Housed in the massive gauntlet around Anthrak's right hand is his collapsible energy sword, which extrudes on command from within his gauntlet and ignites with blades of crimson force. While the sword state is the most common way he wields this weapon, he also will unfold the two-pronged blade into a staff when a more defensive stance is called for, twirling it to deflect incoming attacks before folding it again to put its full force into a cleaving blow. Compensating for the tremendous forces generated by this weapon's blade requires he wear a tight-fitting exoskeletal sheath over the entirety of his right arm and shoulder, for the additional strength and control needed to wield it effectively.

On occasion, especially while fighting alongside the Vanguard or when defending the city against invasions, Anthrak wields a Rikti sword, a trophy of his many victories over the tireless invaders. While he most often wields it when he is facing the Rikti, he will also carry it into battle against others for the shock effect of the ease with which he handles the enormous blade.

Anthrak goes into battle with only a single piece of armor, a combination of breastplate and pauldrons that is traditionally the only armor worn by a swordsman of his caste. It protects his heart from frontal assault (his own agility and awareness are responsible for guarding against attacks from behind) and prevents the severing of his sword arm. This is all the protection he typically desires, or is culturally allowed.

He has a second suit of armor, a heavy suit of Maradur chain decorated with golden spikes. It is intended to be worn in non-combat situations, to show respect to those he is meeting off of the battlefield. He rarely goes into combat in this ceremonial armor, but does take the time to do so on occasion just to preserve his skill fighting with the additional encumbrance.

Anthrak views it as highly dishonorable for a warrior to rely on artificial intelligence to decide the outcome of his battles. Technology is an important factor in every battle, but the test must always be one of mind against mind. In accordance with this philosophy, Anthrak's nanites are dependent upon his consciousness and will to direct them. If he is asleep or unconscious, they cannot serve him -- while their specific processes are automated by their programming, Anthrak must command them to receive any benefit from having them in his system. They are useless without a mind to direct them.

Since his arrival on Earth, Anthrak has adopted the League of Misfits as his new clan. They provide him a home with allies he trusts so that he can rest safely without the protection of his nanites, and they have shown him a great deal of satisfying, hectic combat against nearly impossible odds -- in triumph and defeat, he is proud to announce his name alongside that of "Clan Misfit".

In July of 2008, a short time after his unmasking, Anthrak was invited to ascend to the rank of Master Misfit. He has solemnly accepted the honor and responsibility of acting as both representative of and example to his chosen clan.

Anthrak has rarely felt so alive and pushed to the brink of his abilities in battle as he does when fighting in the service of the deposed Emperor Imperious against the traitors who follow Romulus Augustus. Though he is swift to respond to a request for help from his clan or its allies in their own time, he spends much of his time on Earth in its distant past, crushing the betrayers beneath a blade pried from their master's hand.

Three words uttered with a mixture of reverence and rage, the phrase is equal parts battle cry, affirmation, oath, and punctuation. Anthrak has referred to this mantra as an announcement to the battlefield, a declaration of his identity that ensures his foes will know whose blade has cut them down. It has been seen that his righteous (..and tireless...) proclamation of self inspires a similar pride and determination in his allies, which often results in their enemies having very little doubt as to who exactly defeated them.

Anthrak has stated that he has many children on many worlds, but has offered no exact accounting or details regarding them or his mates. He would never have mentioned anything on the subject at all, had he not been forced into the discussion by the surprise arrival of one of his daughters on Earth, the ruthless and deceptive Xaia.