In Trish's handwriting: As Barb does not understand the fine art of reading and writing, I have decided to keep a journal for, and of, this woman, and have agreed to take down a few of her thoughts, as well.

Barb, as she has told me, hails from the far northern waste, barren with snow. She grew up in a small tribe of other barbarian-like men and women. She has told me of the place only a few times, but from what I gather it is quite a fierce place. She told me of only one of their beasts, their bear-cows, or was it cow-bears? I can never be too sure of what I hear from that woman, sometimes. They are a rather frightening creature, who's owners and milkers are among the bravest beings in the tribe.

Barb would like me to quickly inform you that should you choose the wrong nipple to milk the beasts with, it's shown why only the bravest, or from what I see, the most foolish, take the job.

It seems that anyone of the tribe can become a warrior, if only because, as Barb has put it, anyone can pick up an axe or club. Still, I do have to wonder just how many of these savage people would not choose such a career path, and how anything else could possibly get done in the tribe because of that!

Large colorful doodles of barbarians attempting to milk, and subsequently being mauled, by bear-cows cover the next page.

I have learned that upon the age of 16, every member of the tribe is sent in to the world, or possibly just the area around the village, with a weapon and the simple, sacred mission. Hit things. I imagine that the larger creature or creatures they are able to slay will be met with more and more honor, though I could never hope to know, knowing how these people are... should they all be like Barb, anyways.

It was during such a mission, I have discovered only recently, that Barb had met me! I can only imagine how long she has been away from the village, then, if 16 is indeed the age she left it at. I will have to remember to ask her just how old she is, some time, for I can not even begin to fathom what her people must be thinking happened to her, at this point. Ah, but she will surely have the grandest tale of any in her village, after all of this...

I don't know why I feel the urge to write this here. I know it is because she can not read it, but I could just as easily write it in my own journal... perhaps, secretly, I truely wish her to know how I feel about her... Every time I look at this woman all I can think is 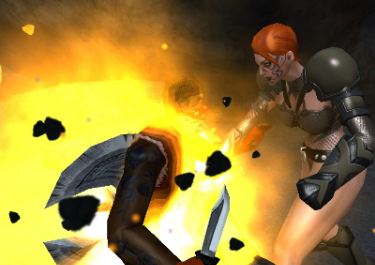 Training since a young age, she has toned her body in to a lethal weapon, muscles glistening across her arms and legs, barely restrained in her platemail. She can withstand a rather high amount of cold, thanks to her childhood home, and has become extremely durable, her energy seeming to last for hours before she needs rest. Even without her rippling muscles, she is quite an intimidating thing, towering over most people, and many creatures, her facial tattoo and fearsome expressions in battle only adding to her mighty visage.

Upon her back rest two large axes, which she uses with a terrifying skill. One of them is her weapon of choice, a gargantuan two handed battle axe that she swings forcefully in the grip of just one of her hands, cleaving bone from flesh. The other is a magical blade, a weapon exceptionally effective against the undead, though no less lethal to those of flesh and blood, either. Strapped to some various other part of her body is a long rod that was 'borrowed' from Trish. The magical device hurls dark energy at it's target, though its a bit cursed, as well, the owner being given horrid nightmares... of course Trish knows this, and only allows her to keep it since she is sure the woman delights in killing those creatures in her dreams. 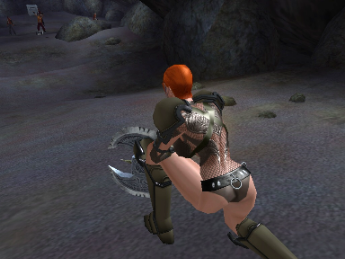 Despite her delight in violence, this certainly does not mean Barb is evil or cruel. Quite the opposite in fact. While she may think that violence is the best answer to everything, she is a very caring person when she needs to be. She can be kind and even thoughtful, though these intentions do not always seem obvious, many times being fumbled in to something foolish or lewd as she attempts to expand on the thought.

Discarding much of her warmer clothes shortly after leaving her homeland, that is, if her tribe had even worn any, being the tough, grizzled things they are, she now wears only her armor. Large metal plates surround her shoulders and bosom, a heavy chain link mesh beneath and covering most of the top portion of her body. The chainmail runs down her arms, ending in rather large gauntlets, capable of fracturing a human sternum upon impact. The chainmail abruptly ends, though, at her hips, where it meets a heavy, black leather belt, beneath which is only a meager loincloth, that does not always cover her newly aquired 'important bits'. Finishing her armor are a massive pair of plate sabatons, reaching up to her knees, giving the woman little stealth as they smash in to the ground with every one of her careless, heavy steps.

Since the incident in the tower, Barb has been given a distinctive feature that her loincloth attempts, though quite often fails, to hide. Beneath the tiny peice of cloth hides an extremely large male 'member', which she has grown more than used to. Trish quite wonders if they should ever find the cure to their curse, if Barb would even be interested in it, any longer. 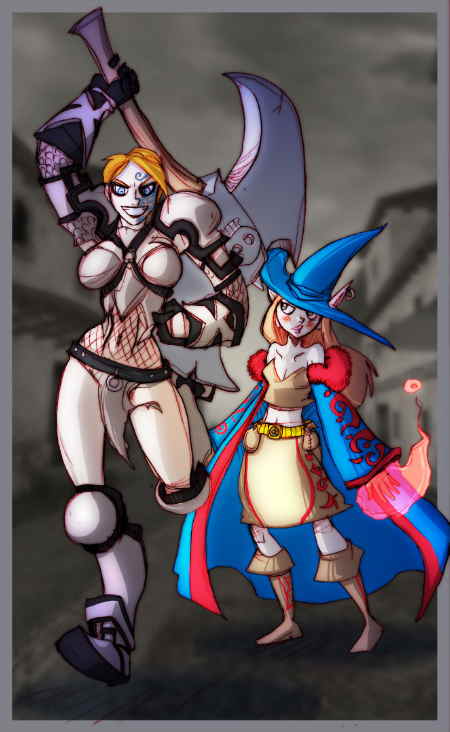 Trish, or Nit, as Barb refers to her to, much to the Elf's displeasure, is the barbarian's travelling companion. It was through her magic that the two arrived in Paragon, and it is now with this elf that she explores this new world with. She had met the elf late one night outside of a tavern in their homeworld after rescuing her from an attempted rape by two men(She got to kill one! Yay Barb!). It didn't take long for the two to become fast friends, Barb being, as she may or may not know, just about the only person Trish truely considers a friend.

After traveling with Trish for quite some time, the two began to grow closer and closer, untill the one night, off away from the rest of their adventuring party, they shared a sleeping bag. Much to Barb's confusion, though, no matter how 'close' the two get, or how often they get 'close', Trish dosen't seem to be proud of the fact. At least, not in any place public, and certainly not in front of anyone else. Still, she's given plenty of reassurance when the two become intimate, as she seems to grow consideribly more relaxed and compassionate afterwards.

Romantic and lustful feelings aside, Trish is a valuable asset to the warrior woman, providing the voice of reason to the duo, as well as being the one who can both read and write. Usually using her sense of smell, and other more primal means, to locate a thing or place, she gladly turns to Trish for directions when a map is needed, barely able to find which way is up on her own. Trish also attempts, though usually fails, to manage the duo's financal means. Saving as many copper pieces(pennies), silver pieces(Nickels, dimes, and quarters), and their own gold coins(Gold!), she has taken to collecting these odd peices of paper the inhabitants of this world use, as well... only to usually find half of their earnings spent on mead or other various items and services that Barb feels would be useful to them, though has no understanding of(Not that Trish always understands them, either), such as car insurance.

While she cares for Trish, Barb is not above putting her own curiousity before the elf's throbbing headaches. She delights in exploring her wonderful 'picture' books, using her magical coats to hold rather old yak cheese, among various other foods, and generally seems to adore teasing the poor prissy thing in public. If she could read minds, she would hear the elf wondering why Barb loves to frusterate and anger her so... as well as other various 'private' thoughts and fantasies, regarding the massive woman, that would make even an ogre blush. Still, the two are as close as one could imagine, almost never being seen apart from one another, the only time being when Barb sleeps, as Trish requires only a few hours of rest.