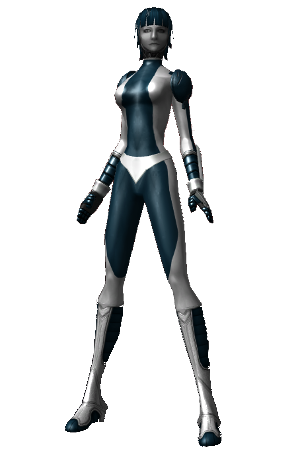 From Praetoria to Paragon City

Jenny Herder (she had her name legally changed from "Herder 867-5309") is a self-aware Praetorian Clockwork who came to Paragon City with her "puppies" (robotic drones) after the fall of Emperor Cole. She was manufactured on December 5th, 2011 as one of Praetor Berry's numerous unfinished project. As her formal designation indicates, her class of Clockworks was meant to be in charge of other, less sophisticated automatons.

Upon arriving on Primal Earth, she joined W.A.T.C.H. where she met and befriended Bridgit Sundstrom (aka Isprinsessan), another Praetorian refugee. She was also in friendly terms with W.A.T.C.H. member Allie Monet but did not get along personally with then-leader Hana Yamada (aka Nonohana).

Trying to fit in normal society, she went to a few parties where she met Catherine Grey (aka Chicago Cat), after which she decided to leave W.A.T.C.H. and join Christian James (aka Xeden) and Cat Grey into the newly-reformed group, initially "to have a good home for my puppies... and me". She was known to be a very enthusiastic, supportive and appreciated member of the Axiom Guard.

After being promoted within the ranks of the Axiom Guard, Jenny decided to upgrade her physical framework for one sturdier than her previous Clockwork framework.

Shortly after, she fell victim to the otherworldly serial killer known as the Star Child, who all but destroyed her physical form. She was eventually put back together in a new, improved, Mark III configuration by Fusefray, the sister of her teammate Belle Barium.

Jenny adopted the internet call-sign of 'Saraswati' in order to use her considerable abilities to retrieve information to help people. As 'Saraswati', Jenny routinely answered dozens of email a day ranging from the frivolous to the life-changing, unaware that the actual Hindu Goddess of knowledge and wisdom had taken an interest in this endeavor. It was also around that time she found and re-activated a warehouse-sized mainframe computer system of unknown origin, calling it "the Vision".

As thanks for the work she had done in her name, Saraswati revealed to Jenny the existence of the child whose mental engrams had been used as the basis for Jenny's personality matrix:

My name is Sarah Jane Kellerman... I live in Imperial City... My parents are John and Mary Kellerman...

Jenny took a month-long leave of absence following this revelation in order to discover who she really was and explore her adoptive world. She also took the opportunity to upgrade her physical frame to a new configuration (the Mark IV), dropping her signature pigtails in favor of a more 'mature' hairdo and modifying her speech routines to a more 'natural' sound.

Upon her return, Jenny announced she was retiring from active membership in the Axiom Gaurd to dedicate herself to the Victoria Landsfeld Foundation, which she had created in order to further her long-term plans.

The Foundation was named in honor of the late daughter of Regina Landsfeld, who once believed Jenny's personality engrams to be based on her daughter. Mrs. Landsfeld had hired the attorney firm of Dewey, Dewey, and Howe to have Jenny declared her property, but Jenny met with her and was convinced of her honorable if misguided intentions, while Mrs. Landsfeld realized Jenny was not and had never been her lost daughter.

Jenny asked Mrs. Landsfeld and Hana Yamada to join the Foundation as its "moral compasses". As Jenny put it "I know you will strive to do what is honorable while I may be content to do what is expedient."

The Foundation has opened a string of offices all over the world, for which she recruited innovative and open-minded personnel of all ages.

Upon her arrival in Paragon City, Jenny was known to be quite energetic and to react like a typical human teenager. In that regards, she exhibited signs of what Paragon City's meta-psychologists have termed the "Pinocchio Syndrome", i.e. the desire by advanced artificial intelligences to become or at least emulate their human counterparts.

It also manifested itself in Jenny's distinctive speech pattern: unlike the Praetorian Clockworks' usual codified speech, Jenny spoke in complete sentences although in a sing-song voice, often putting emphasis on the wrong syllables. She used the upgrade to the Mark IV framework to acquire a more 'natural' sounding voice.

Jenny has demonstrated a few "human" likes and dislikes: she likes music and dancing, can establish friendships easily but hates spiders. She used to be reluctant to approach large bodies of water due to an unfounded fear of rusting, but during her last leave of absence, she was finally able to "conquer" this fear with help from her new friend Beatriz Anna Valentina Allegra da Fontaine

It has been speculated whether or not Jenny has a soul.

Praetor Berry's Clockwork secretary, IVy, has told Jenny that his experiments leading to her creation had given her a soul of unknown origin. IVy also said that made Jenny "unique" amongst the other Clockworks. Since then, it has been revealed that the 'soul' in question (or at least the memory engrams) belonged to a 7-years old girl from Imperial City named Sarah Jane Kellerman, who was dying from a degenerative nervous system disorder when she was transferred to Praetor Berry's "Project Herder". How much of Jenny's personality is Sarah Jane's and how much is Jenny's own AI programming is still up to debate.

Another speculation has been as for whether or not Jenny's soul and personality could be "cloned" or "backed up" into another robotic body. No attempts have been made so far to prove or disprove this theory; her core programming has always been transferred "as is" during Jenny's previous body replacements/reconstructions.

Being a Herder - The Herder Protocols

Jenny's primary function was to lead and supervise squads of less-sophisticated robotic drones and to protect them from outside threats they would not be equipped to deal with. Possibly due to her "uniqueness", Jenny has expended this mandate to

She is very protective of her "puppies", even attributing them human traits - for example when she says that her "puppies" don't like the cold.

After joining the Axiom Guard, Jenny saw Catherine Grey as a mentor, akin to a child's school teacher, and would often seek approval and positive reinforcement from her. She has also shown the utmost respect for Christian James (if Cat Grey was her "teacher", Xeden would be the "principal") and others in the Axiom Guard's command chain (her "substitute teachers")

She kept close contact with Bridgit Sundstrom after leaving W.A.T.C.H., even encouraging her to join the Axiom Guard.

She said on a few occasions that the Praetorian Clockwork known as IVy was her "older sister" but she might have said that metaphorically.

With her most recent upgrades (the Mark IV and Mark V) she now possesses upward to 60 terabytes of data storage capacity, which she can access at will - the usual visual cue is her eyes starting to flash or flicker. She records everything she sees or hear and can later selectively broadcast it over the Internet or other networks, or archive it on the Foundation's mainframes. She spends most of her time in the office at One Statesman Plaza when she's not with her "puppies".

She can monitor wireless data communications between external devices, which she once described as the device "singing" to her. She can also routinely access any device that is potentially connected to any network, giving her access to a tremendous amount of information sources (which she uses in her 'Saraswati' persona). It has been implied that Jenny is on friendly terms - and often on a first-byte basis - with most computer systems worldwide.

She uses a variety of sensors in order to "see" the people and objects around her: body mass and density, electromagnetic interferences, heat signature, and what she calls an "alpha pattern" (which has been compared to a person's "psychic aura"). She can see people who are invisible to conventional sight as long as they are not also masked to her other sensors. She can see people who are not technically alive (e.g. Eidolons and zombies), defining them as merely "different". She can differentiate between beings originating from Primal Earth and Praetorian Earth.

Jenny's gravimetric sensors can evaluate structural stress on her framework and components; the data generated is then used in her Fight Or Flight (FOF) Response Protocol. As an unexpected side effect of her evolution as a sentient A.I., her sensors have been found to be sensitive to "emotional" stress as well, such as the death of a teammate.

Coming from Praetoria, a world where magic has been almost entirely eradicated or relegated to the Night Ward, she was ill-equipped at first to deal with magical phenomena and individuals. For example, she was unable at first to discern the innermost section of the Midnighters' Mansion: she could "see" the people in it but little else, impeding her movements and sense of direction (and freaking her out a little at the same time). Her upgrade to the Mark III framework removed most of those sensory limitations but she remains wary of anything "magical" or outside her sensory perception.

She has "trained" (reprogrammed) one of her "puppies", fINN, to decipher electronic signals and another, jAKE, to disarm explosives. She can also recalibrate her "puppies"' sensors to suit different tasks, e.g. detect precious metals.

She can drink and process alcohol, but over-taxing her processing mechanism can lead to cascade failure in other systems, for example, her servo-motors and gyroscopic sensors (i.e. she can get "tipsy").

She can duplicate other people's voices and intonations.