Born as an American Ideal, reflected back by the poets and sculptors of the French Revolution. Mother of Immigrants' shield and torch have been briefly wielded by others in the past (most recently in 1954), but their actions led to such doubt and regret on Mother's part that she spent decades completely quiescent, until recently, Cypris Johnson, the international tennis star who secretly is the incarnation of Aphrodite and herself a superhero, retired, and put her headband around the statue's forehead.

Standing slightly over ten feet tall and weighing nearly one and a half tons, a stern expression seemingly fixed on a face that, like the rest of her body, is covered in a fine patina. Golden crown, golden shield, and golden torch. And, a white composite spandex outfit reminiscent of that worn by the last person to wield the torch, shield, and crown (a famous tennis player and goddess).

When supremely filled with rage and devoid of doubt, Mother of Immigrants will appear even larger, and have a golden hue. Occasionally she may assume the semblance of Cypris Johnson. And when particularly bereft of purpose and wracked with guilt, she may appear as a relatively normal, sad little old lady.

At over ten feet tall and composed of living phosphor bronze and weighing one and a half tons, incredibly tough, with strength proportional to her weight.

Mother of Immigrants was created with two symbolic implements-- a brand (scepter), and a shield. The symbolic meaning of each has gained significant reality during her years (well over a century) of existence. Her third item of power is the gold circlet she wears, which was originally a headband she was given by an international champion tennis player and avatar of Aphrodite, when the latter retired from tennis.

In situations that call for negotiation, compromise, and tact, with people who threaten innocents, especially immigrants, Mother of Immigrants is prone to few words and swift punishment.

Absent any compelling injustice to fight, Mother of Immigrants' size and toughness are much diminished. Altogether outside battle she can appear as an ordinary woman; most recently, resembling Cypris Johnson, the retired tennis star.

In situations in which the legitimacy or execution of American Ideals or the protection of people fleeing, migrating, or seeking her protection is inadequate, or she or her tools are otherwise used to unjust ends, Mother of Immigrants' becomes slow and sleepy. Probably if her brand were stolen and used to oppress minorities, she would become permanently sessile.

Mother of Immigrants' parents were Talos (the Bronze Giant) and Marianne (the personification of the French Republic). Her grandparents were Joan of Arc (a descendant of Merlin) and Jean-Jacques Rousseau son of the god Attis (who renounced godhood, lived as a roman slave, won his freedom, unreounced his godhood, and wandered the earth), and the Greek gods Hephaistos and Athena. Her aunt is Columbia and her older half brother is Asterion (the Minotaur). 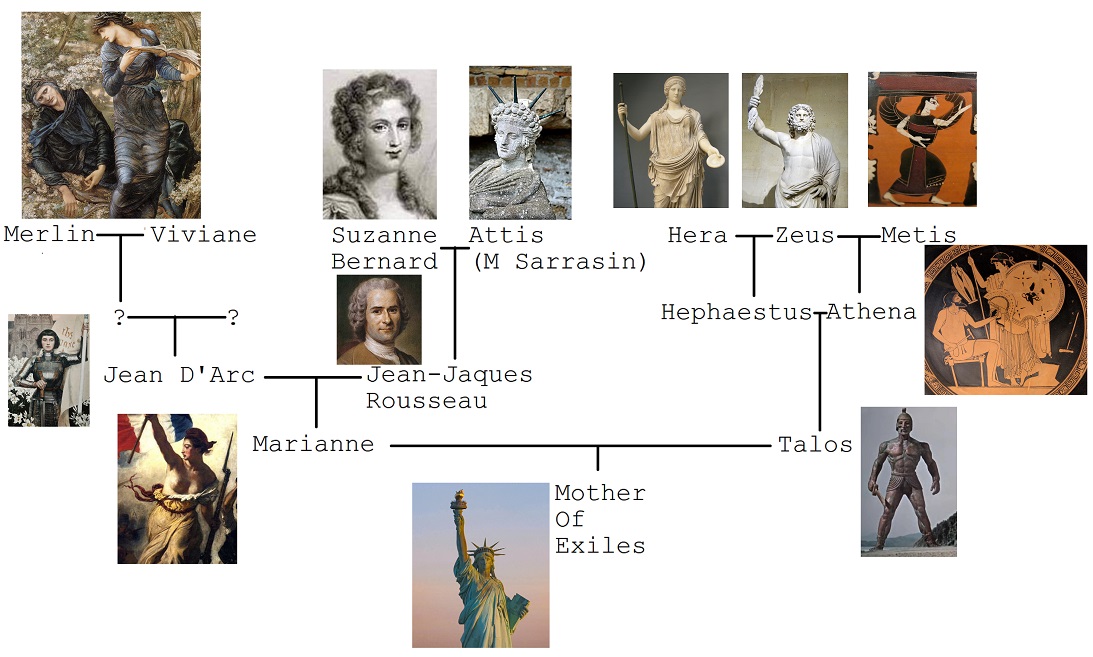 Cypris Johnson, the tennis star, also secretly her aunt the Goddess Aphrodite, is Mother of Immigrants' friend and mentor. The superheroes Oak Tree and La Viajera are good friends, as both, like her, are a little lost in the ordinary human world, concerned with immigrants, and/or huge and green.