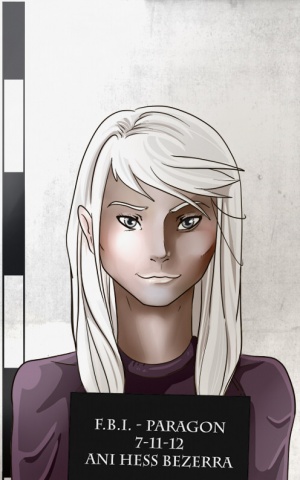 SALAMANCA, RI -- Reformed villain, controversial hero, decorated Vanguard captain and mouthpiece of the resurgent pro-mutant political movement Nation, Ani Hess Bezerra was taken into custody Wednesday night outside his home after refusing to cooperate with investigators, a spokesperson for the FBI’s Paragon City office confirmed today. The Bureau further confirmed that Bezerra is their lead suspect in the bombing that resulted in the deaths of Dr. Leonardo Connolly and his 3-month-old son Bryce, along with Dr. Connolly's pilot and bodyguard, in a plane crash on January 2nd of this year. The crash, of a modified Boeing 767 owned by the Biogenics corporation, was ruled a murder investigation after the NTSB determined the cause to be the detonation of at least one explosive device aboard the aircraft.

Despite holding many innovative patents and building a personal legal net worth of over 2 billion dollars, Connolly was best known as the radioactive mutant archvillain and mercenary Midnyte Flare. Flare first came into contact with the Androgyne when Bezerra was a member of the Reciprocators, after the successful capture, imprisonment and pacification of global threat Paul Ooshun. Flare's wife, Lilith "Mirror Shade" Hawkins, arranged and broadcast over the Internet the murders of Melissa & Matthew Ocean, the newly restored Paul Ocean's surviving family. The murders themselves were carried out by Vice Torentsa; both Hawkins and Torentsa are currently at large.

The FBI is examining the possibility that the Androgyne may have set the bombs on Connolly's plane to enact retribution against the Mirror Shade for her role in the gruesome slayings, in what hero-watchers term a complete perversion of the Reciprocators’ principle of “returning the favor”. The FBI’s statement confirmed that recently discovered evidence which may connect Bezerra to the crash motivated the late evening interview that led to the arrest. The decision to arrest was made after Bezerra made reference during the interview to details of the bomb’s design that have not been made public.

No representative of Nation has yet responded to requests for comment, nor issued any statement on the arrest. The Androgyne became an informal high-visibility spokesperson for the then dormant political movement in February, after proclaiming his own support for their cause. Nation is rumored to take an extremely dim view of mutant-on-mutant violence, and has claimed since its resurgence that the terroristic methods of its past leadership are behind it. What effect the FBI and ATF’s accusations may have on Bezerra’s standing in the “pro-Evolved” movement, as well as the world’s perception of the prominent but secretive organization, is uncertain at this time. Nation is already under heavy scrutiny following the destruction of Nova Praetoria, given Nation’s past claims before the United Nations that it possesses nuclear weapons of its own, a claim the modern incarnation of the organization has yet to confirm or deny.

A spokesman for the Vanguard Herald confirmed that if the allegations against Bezerra are true, the Helm Captain’s clemency arrangement, which allows the former archvillain to operate as a registered crimefighter, will be irrevocably terminated. The arrangement does not forgive Bezerra’s past crimes but postpones prosecution for his role in the Lewis High Massacre of 2005, in which 62 attendees of the school’s Homecoming dance were slain by the Androgyne’s mutant radiation, and for crimes committed in the service of Arachnos until his defection in late 2008. Bezerra’s initial appearance in federal court is planned for Friday, July 13th.

Black Starbeam, founder and leader of the Reciprocators, expressed surprise and questioned the facts of the case when reached for comment last night, but acknowledged trust in the FBI to ultimately do the right thing in their investigation. The Graveyard Baron, leader of the League of Misfits, offered no comment whatsoever to the several news outlets that arrived on-scene shortly before the the Androgyne was led handcuffed and smirking out of the group's home and headquarters. Bezerra lives in Salamanca’s Misfit Mansion with his wife, Lia “Boom” Bezerra Hess, an officer of the unorthodox League. Reporters were unable to pursue further comment from Boom or other residents after the Androgyne was taken into custody, as an unexpected thunderstorm forced the members of the media present to seek shelter away from the Mansion grounds.