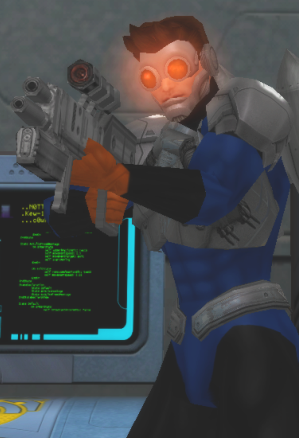 Android is an automaton powered by advanced A.I., originally created by Dr. Thomas Tyburn, alias The Techspert: a roboticist turned supervillain and criminal mastermind. It is an exact copy of Andy Ackerman, a brilliant young engineer and D.A.T.A. employee who was kidnapped, murdered and silently replaced by the mad doctor in 2010, when he was only 30 years old. All of the Techspert's creations developed free will when their master was seemingly killed during a battle with the heroes Beetleman and Professor Ape six months after Ackerman's abduction, a large explosion leading his workshop to collapse on top of him (though a body was never found).

Given the elaborate nature of The Techspert's robots, all of which were designed to think, speak and act in a way indistinguishable from real human beings, most of them were hunted down and destroyed by a Longbow taskforce in the aftermath of their creator's apparent death. Andy Ackerman's decoy, however, was never discovered. Although it immediately became aware of its synthetic nature when The Techspert's control over it was lifted, it continued to possess Andy Ackerman's personality, memories and skillset. It chose, silently, to continue living the life of its human counterpart, with Ackerman's family, friends and work colleagues being completely unaware that the Andy they now know is, in fact, an android.

Driven by a mixture of guilt and virtue inherited from Ackerman, the automaton quickly set out to atone for the sins of its 'father' by becoming a superhero. Using D.A.T.A. workshops after hours, it created a sophisticated set of crime-fighting gear: an energy rifle, a laser baton, a forcefield generator and a jetpack. By day, it continues to work in the D.A.T.A. labs undetected as Andy Ackerman, now a Senior Engineer. By night, it fights crime as the Synthetic Sentinel, Android.

Android operated as a solo hero for the first year of its career, establishing an informal crime-fighting partnership with the hero Brickyard and quickly making several enemies that have remained consistent rivals, including the supervillains Laser, Reacto, Outline, Coldray (once the Fearsome Four, now all members of C.R.I.M.E.) and Datamind. As a fledgling superhero, Android found itself looking to some of the most established and respected protectors of Paragon City as mentors and role models, including Xanatos, Poison, Vindicator, Inertial, Seadevil and Susie-Bot, and engaged in confrontations with some of its most infamous supercriminals, including Mr. Mud, Mindswipe, Nimrod, The Furtive Fox and Killerwatt.

It was no sooner that Android entered into this new world of heroes and villains, though, that it came to an end. On 30 November 2012, Rularuu the Ravager broke free of his bonds and launched a vicious and devastating attack across thousands of dimensions, slowly destroying them one by one in what has since come to be known as the Battle for the Multiverse. When Rularuu arrived in Android's home dimension (Primal-11), he was met with considerable resistance from both heroes and villains alike. Many of the old guard were killed in the ensuing battle with Rularuu and his forces, with Xanatos and Mr. Mud putting aside their differences to lead one final, desperate charge against the Ravager within the grounds of Ziggursky Correctional Facility under the tactical guidance of Nimrod. The combined efforts of hundreds of heroes, villains, rogues and vigilantes subdued the dimensional destroyer long enough for The Phantom Visage to banish him back to the Shadow Shard using the Book of Rularuu, though the immense power required to do so destroyed him.

Android played only a small part in the Battle for the Multiverse as it fought the Soldiers of Rularuu in Talos Island, but it had an enormous impact on its future. When the dust settled, the likes of Xanatos, Charon, Nimrod and thousands of other prominent heroes and villains were dead and the world was changed forever. In response, Android spearheaded an initiative designed to respond to such devastating threats should they arise in future. With Brickyard, he co-founded The T.E.A.M. (or the Tactical Emergency Assistance Movement), a loose coalition of heroes from all walks of life who come together to tackle significant threats to Paragon City, the world and the multiverse.

Android and Brickyard were soon joined by several other heroes – most notably Metal Mage, newly freed from The Phantom Visage's magical sanctum, Canid and Blacksmith. Together, the group has halted insidious plans by the likes of Colonel Duray, Battle Maiden, Reichsman and Lord Recluse. Android's experience with The T.E.A.M. increased its powers and skills significantly; over the next several years, it put the Fearsome Four behind bars and single-handedly defeated The Council's Archon Burkholder, preventing his plan to unleash a giant killer robot upon Paragon City. Today, Android continues to protect Paragon from criminals and supervillains, while frequently calling together The T.E.A.M. to contain larger threats.

However, Android and his close allies are now the target of a much more powerful threat than they have faced in several years; Android, Brickyard and Metal Mage are currently being actively hunted by members of C.R.I.M.E., a coalition of supercriminals established specifically to combat The T.E.A.M. that includes several of their most powerful and embittered foes. 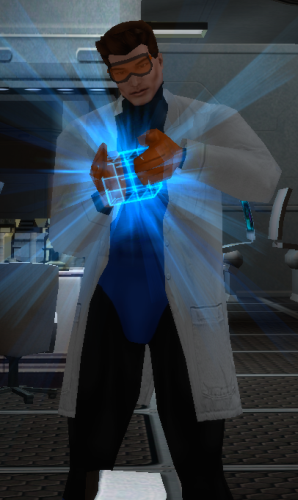 Android is an automaton, meaning it is able to survive indefinitely without food, water or sleep; it is effectively immortal for as long as its power source remains charged and undamaged. It is largely invulnerable to blunt force trauma and is highly resistant to psionic attacks (though particularly vulnerable to assailants with electrical, water- or sonic-based powers that disrupt its core systems).

In addition, it carries crime-fighting equipment of its own invention, crafted in the D.A.T.A. workshops beneath Paragon City Hall: a powerful but non-lethal energy rifle, a laser baton for close combat, a forcefield generator that shields Android from incoming attack and a high-powered jetpack. These items were created using the implanted memories and engineering skills of Andy Ackerman.

Android is an affiliate and sometime operative of Longbow and Vanguard, as well as a reserve member of the Freedom Phalanx. Its primary affiliation is to The T.E.A.M., a supergroup co-founded with Brickyard. The T.E.A.M. maintains a diverse roster of otherwise solo heroes and vigilantes with a range of powers and backgrounds who are willing to answer the call when Paragon City, Earth or the multiverse come under threat from a significant force. Thus far, The T.E.A.M. has been assembled to tackle Colonel Duray, Reichsman, Lord Recluse and Hro'Dtohz, the Rikti Lord of War. Its governing council is currently considering how to deal with the threat posed by C.R.I.M.E., a coalition of its most frequent villains.

The T.E.A.M. is headquartered in the Workshop, at one point Android's personal base of operations. The Workshop is a converted warehouse in the Seven Gates district of Brickstown, which has been equipped with the latest technology using a financial donation provided to the group by Longbow. The Workshop also contains a portal to the Librarium Arcanus, a magical library once maintained by The Phantom Visage and now overseen by Metal Mage.

Its arch-nemesis is The Techspert, currently presumed dead; however, as a body has not been recovered, Android continues to search for confirmation of its creator's death. Additionally, Android has made many enemies over its crime-fighting career, most notably Laser, Outline, Coldray, Reacto (collectively known as the Fearsome Four previous to their joining C.R.I.M.E. in recent years) and Datamind.

It is currently concerned with tracking down and arresting the myriad members of C.R.I.M.E., which includes its own rogues gallery and several other high-profile villains, including Arsoner, Revolver II, Killer Chill, Deadeye and Great White.