True patriotism hates injustice in its own land more than anywhere else.
—Clarence Darrow, Resist Not Evil (1902)

Armored Battalion was designed as a part of an effort to create a "patriotic" style hero. The name was inspired by conversations with the Bronze Juggernaut. The concept takes as its inspiration a healthy dose of Captain America (who is, after all, the iconic patriotic super hero) and a dash of Ultimate Iron Man (not so much the attitude, but the brains and the fact that a support crew is needed to properly utilize the armor). 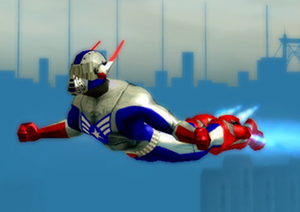 Cooke is a good-natured man, who genuinely feels that his country has a lot to offer the world-but recognizes that there are a lot of forces interested in destroying or conquering it. This sense of patriotism tends to blind him to the darker side of his government; it's hard for him to accept that there are factions that operate in the shades of gray.

In the Battalion, he is selfless in putting himself between his allies and danger. This often leads to a mild sense of recklessness. His confidence in his work on the armor occasionally isn't as warranted as he might like; acting before thinking has caused him several late nights repairing the damage to the Battalion.

Cooke is a believer in technology and its ability to help solve the world's problems. He knows that people will be the deciding factor in using that tech in a "good" manner-that almost any device built can be twisted to harm instead of help. This also renders him somewhat irritable on the subject of magic. Proof of its existence is real, but Cooke prefers phenomenon which can be studied and explained in scientific laws; magic, by his reckoning, doesn't have any issues with breaking its own rules.

The entirety of Michael Cooke's powers derive solely from the Armored Battalion battlesuit. Piloting it, he gains access to the following powers.

Armored Battalion's battlesuit (Mark I) is manufactured from a steel/impervium alloy, making it very difficult to damage. Added to this is a structural integrity field which hardens the armor further. Psionic screens render the pilot nearly immune to assault that can stun, confuse, or even put the wearer to sleep.

Armored Battalion has been tested to lift approximately forty tons of dead-weight. This can allow the wearer to knock down even the largest opponents. In addition, the wearer can emit a beta-energy field from his gauntlets, augmenting his already significant strength. The energy has proven to be harmful-but nonlethal-to both biological, technological, and arcane beings alike.

The battlesuit has a number of other key abilities; a HUD (Heads Up Display) which feeds in real-time information from Control, damage control systems that can reroute power from damaged systems to systems that need the power, a low-grade taser for trivial threats, and a full life-support system that can survive outer space as well as deep ocean depths. The Armored Battalion battlesuit has some other properties.

The Mark I battlesuit is rated at MACH 1 speeds, although this is restricted to a substantially lower speed within the city limits; Control coordinates with the FAA in the event that such speed is necessary.

As a Marine, Michael Cooke is in terrific shape; he regularly runs over a mile a day to maintain his personal fitness.

Later modifications to the Battalion have allowed periods where Cooke can conserve power in using the stronger assault routines. This comes in handy in conjunction with the high-demand advanced targeting system installed relatively recently in the armor.

Michael Cooke is a mechanical genius, having graduated the top of his class at MIT. He has pioneered advances in alternate energy sources, muscle amplification apparatuses, and military equipment design. He designed the Armored Battalion battlesuit, and continues to design future iterations of the suit.

Cooke is also a trained Marine, who is capable of entering a military theater of operations and serving in an infantry unit. This responsibility was superseded by his assignment to the US-SPD.

Outside of his armor, even though he is a Marine, he is as vulnerable as any other human being.

The Armored Battalion battle-suit is a complex affair, requiring a crew of twenty (not including Cooke) to support it. Several are responsible for pre-op preparations, including getting Cooke into the suit (average time 15 minutes, although the team record is five minutes); post-op, including getting him out of the suit and repair work; and during operation, which includes monitoring vital signs, evaluating tactics, information gathering on-the-spot, and other duties as they arise.

Captain Michael Cooke is a technological genius. That phrase is a dime a dozen-especially considering the population of Paragon City. Top of his class at M.I.T. with invention awards all throughout, he immediately joined the Marines.

The decision was a rational one: all his life, he'd wanted to do something for the country he loved. The best way to do that was to offer his life to the United States of America. After the Rikti War, however, he decided that the Armed Forces needed more than brave soldiers and Marines fighting and dying. So he drafted a proposal for a new branch of the military-one that would rely on superhumans. Even though the proposal had come from a simple Lieutenant, the Secretary of Defense heard Cooke's brief, and agreed. Cooke was put under the command of Lieutenant General Brian Hunter of the Army-or perhaps formerly of the Army, since Hunter was assigned to head up the new US-SPD: United States Special Powers Directorate.

The US-SPD was primarily founded to get the smartest, most technologically minded members of the military under one roof, and develop for the next generation of warfare. Unfortunately, as time passed and as budget cuts loomed, US-SPD largely languished, and most of its promise faded unfulfilled.

Until July 24, 2007-when the Rikti began to attack once more in earnest. The next day, US-SPD was given a larger operational budget, and a few special projects were put on the fast track.

One of those projects was Project Armored Battalion.

Michael Cooke's work centered primarily on developing a suit of combat armor for the next generation of soldier. The initial design proved impractical, due to various limits of current technology. In fact, some aspects of the battlesuit required creating entirely new technology in order to make it function. In early 2006, the project was shelved, and Cooke was resigned to doing mostly paperwork. In his free time, however, he continued to design the combat armor, improve on ideas, steamline it from an idea to something more practical.

Then the Rikti resumed their offensive on American soil-specifically at Paragon City. The project was reactivated and fast-tracked. Within nine months, the prototype armor was completed, and initial tests were run.

A crisis involving a supergroup of Paragon City (the Justiciars) prompted a shortened shakedown period for the armor, and Cooke was called upon to be the pilot of the Armored Battalion battlesuit. While the crisis was resolved without his involvement, the US-SPD decided to have Cooke begin operations in Paragon City, in order to react quickly to any further country-shaking events. In a bit of irony, Cooke eventually joined the Justiciars-in part to help keep the government from being played as it had been during the Rihsen Incident.

In April, 2009, Cooke was promoted to Captain for his exceptional work on the Armored Battalion and Steel Brigade projects, as well as his performance piloting the Armored Battalion. In early September, Cooke was tasked to Hyperion Force to mend fences with that group after the Army got on that group's bad side. He would serve with the team off and on until near the end of 2010, when he was recalled to SPD full-time to help work on a response to the growing Praetorian threat.

Cooke was reactivated as a member of the Force temporarily in late 2011 to assist the group during the Nemenian Crisis.